BEFORE THE GAME:
At 1 pm on 28th December, the climate is pleasant at Jain hills in Jalgaon, however the temperature is rising at the National Premier Chess Championships! With last 3 rounds to go, its really a battle between 4 players for the top honours. This is how they stand.


The 5th place is held by Deepan Chakravarthy who is on 6/10 but I think he cannot fight for the the pole position now. So its down to these 4 champions now!
Yesterday was an extremely crucial round. Lalith had the half point lead, i.e 7.5/9. Sasi trailed him at 7/9. But the best part about the 10th round was that Lalith and Sasi faced off each other. Sasi knew that this was a do or die situation for him. For if he didnt beat Lalith, then he would race even further ahead. But this amazing player who has been India no. 2 for a long time showed his class as he won the high pressure encounter!
The roles had been reversed! It is now Sasi who leads the tournament with 8 out of 10. Whats even more favourable for Sasikiran is that he now doesnt have to face any GMs in his last 3 games while Lalith and Adhiban are yet to face off against each other in round 12.
The Dark horse in the title race will definitely be Thejkumar. After his first round loss to Lalith Babu, Thej has been playing some excellent chess to be in the 4th place. Today he faces the leader Sasikiran! Will Thej be able to make the tournament more interesting by beating Sasikiran! He definitely has it in him to beat world class players! And, If that happens then this National Premier will really make the pundits go crazy as then all the 4 players will have a chance. But as of now Sasikiran is a clear favourite to become the National Champion!
Rd 11 which begins in a hour from now that is at 2 pm IST will be a belter! Dont miss it! You can watch the live games on the following link:
http://live.aicf.in/nationalpremier/

AFTER THE GAME:
Something Unbelievable happened today! Sasikiran was cruising to victory against IM Thejkumar on the top board of National Premier 2013. It seemed as if Sasi would maintain his lead. After all he was 2 pawns up. But then Thejkumar deviously set his last trap for the game. He offered the g2 pawn to Sasi who unflinchingly accepted it! What happened next was simply astonishing. The white king had absolutely no squares to go to and Thejkumar produced a brilliant Stalemate idea! 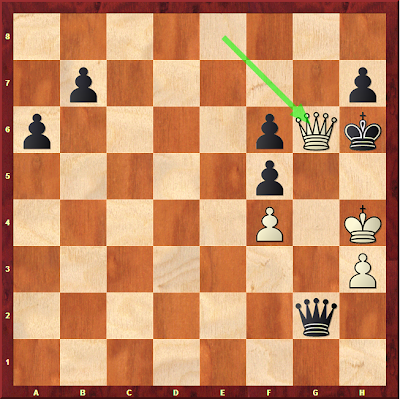 The Qg6 move that you can see in the picture which is usually seen only in books or studies, today occured on the board!It was amazing fighting spirit by the GM elect Thej! To create a trap against a 2669 player which is so subtle that he falls into it calls for great creativity and resourcefulness! And Sasikiran inspite of drawing such a winning position had such a huge heart to analyze the game and laugh at his own mistake!! What a champion! After the game Sasikiran said," All this while I was just thinking about Qf8 Qg7 Qg8 idea and then I cannot take the queen because of stalemate but I can just start pushing my queenside pawns! But when my opponent played Qg6 it came as a total surprise!"

Its such moments which make chess more than just ratings and results. It reminds us that its a sport where there is ample scope for beauty and creativity!!

Thus the standings have again changed! Lalith who won against Deepan which was also a crazy game is now in joint lead with Sasi at 8.5/11. But the tie break is direct encounter which means that Sasi is currently in the first place as he has beaten Lalith. But on the 3rd spot lies Adhiban who is on 8/11. Bear in mind that he has beaten Sasikiran so if at the end of it all if Adhiban manages to tie with Sasikiran, he would be the champion. But we are getting way ahead of ourselves! As tomorrow Lalith Babu and Adhiban face off against each other, it will be a game to cherish! And Sasikiran will take on Rathnakaran who on his day can play some gems! Its all boiling down to an exciting finish. Lets see what happens tomorrow at the best chess tournament in the country!! 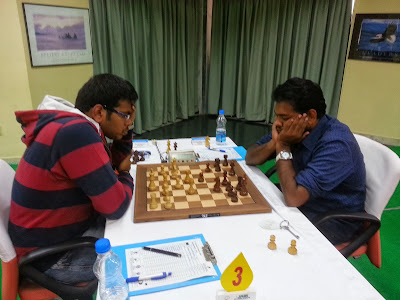 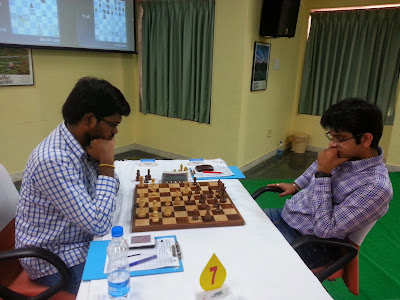 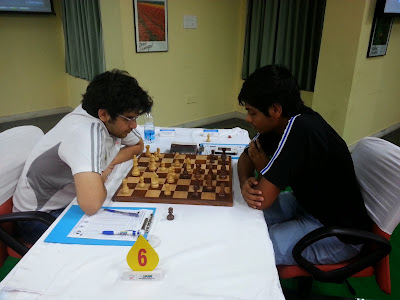 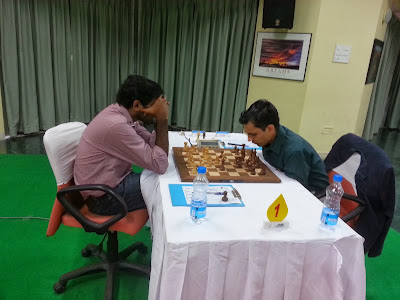 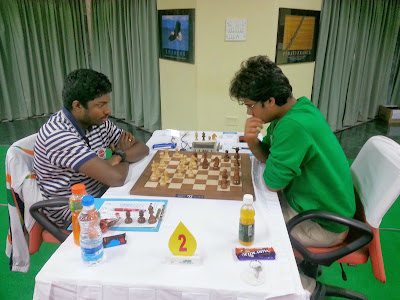 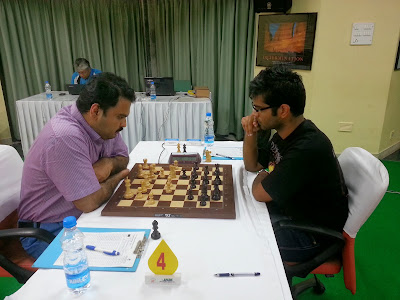 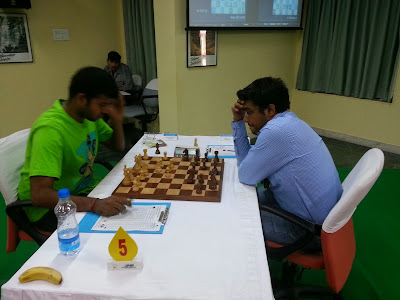