The period was around the 1950s. While the world had great players like Botvinnik, Tal and also the upcoming Fischer, chess in India was absolutely undeveloped. People all over the nation were playing a game that resembled chess but with no fixed rules. In such a situation arose a man from Tamil Nadu, India, who single-handedly popularized the game of chess in the country.

Friends, I am not talking about the great Viswanathan Anand. He was not even born yet. The man who first brought India to the international chess scene was none other than IM Manuel Aaron.

Manuel Aaron was born on the 30th of December 1935. So today this legend celebrates his 79th birthday. 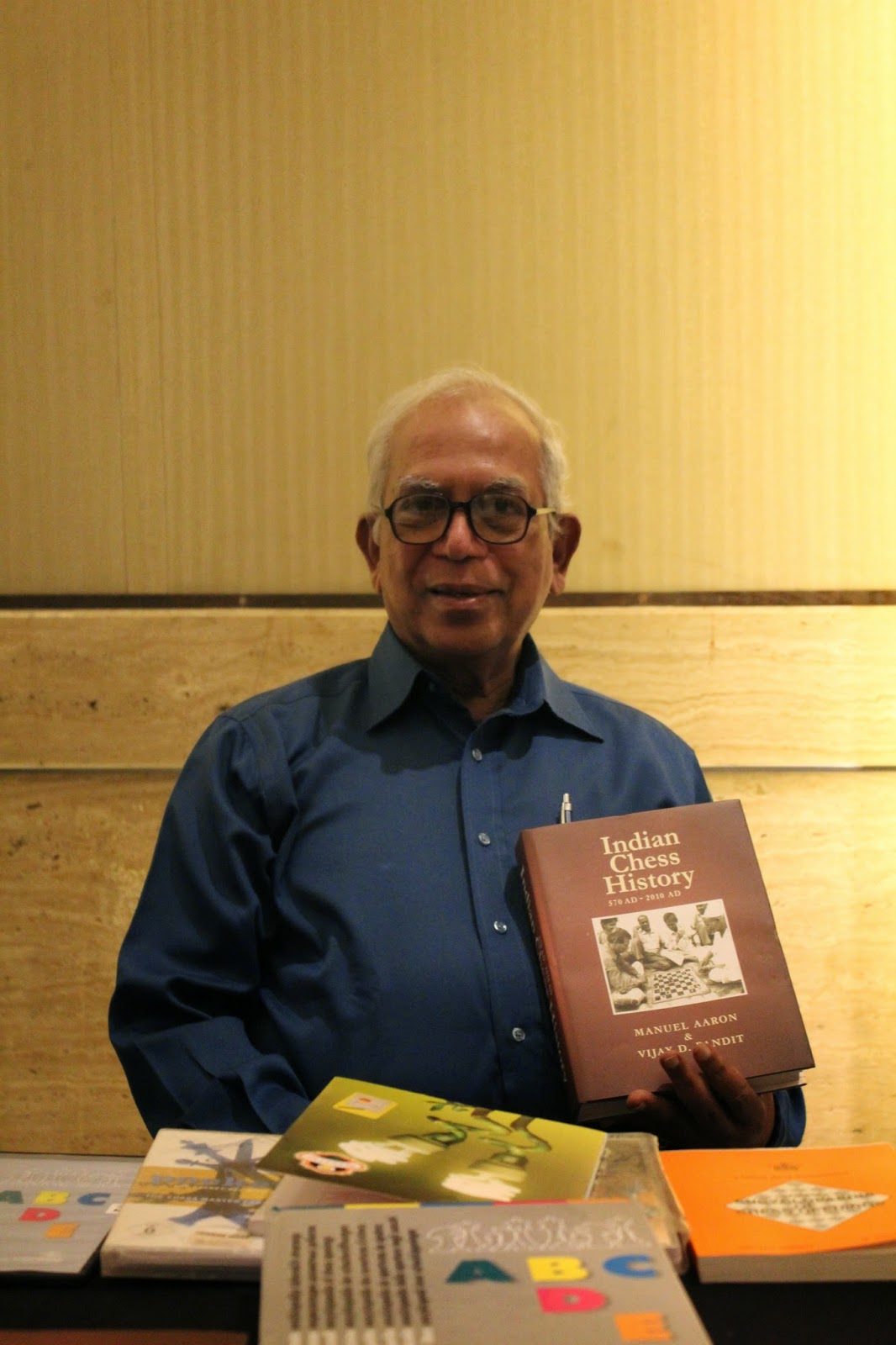 Manuel Aaron, the first International Master of India and also the author of the recently published Indian chess history (picture taken at the World Juniors, Pune in October 2014)

Today chess is my profession as well as the most beloved thing in my life. I cannot imagine what I would be doing without this game. This would not have been possible without the efforts of the great man called Manuel Aaron. He gave the game of chess an identity in India. He made a lot of forums and groups thereby systematizing this sport. 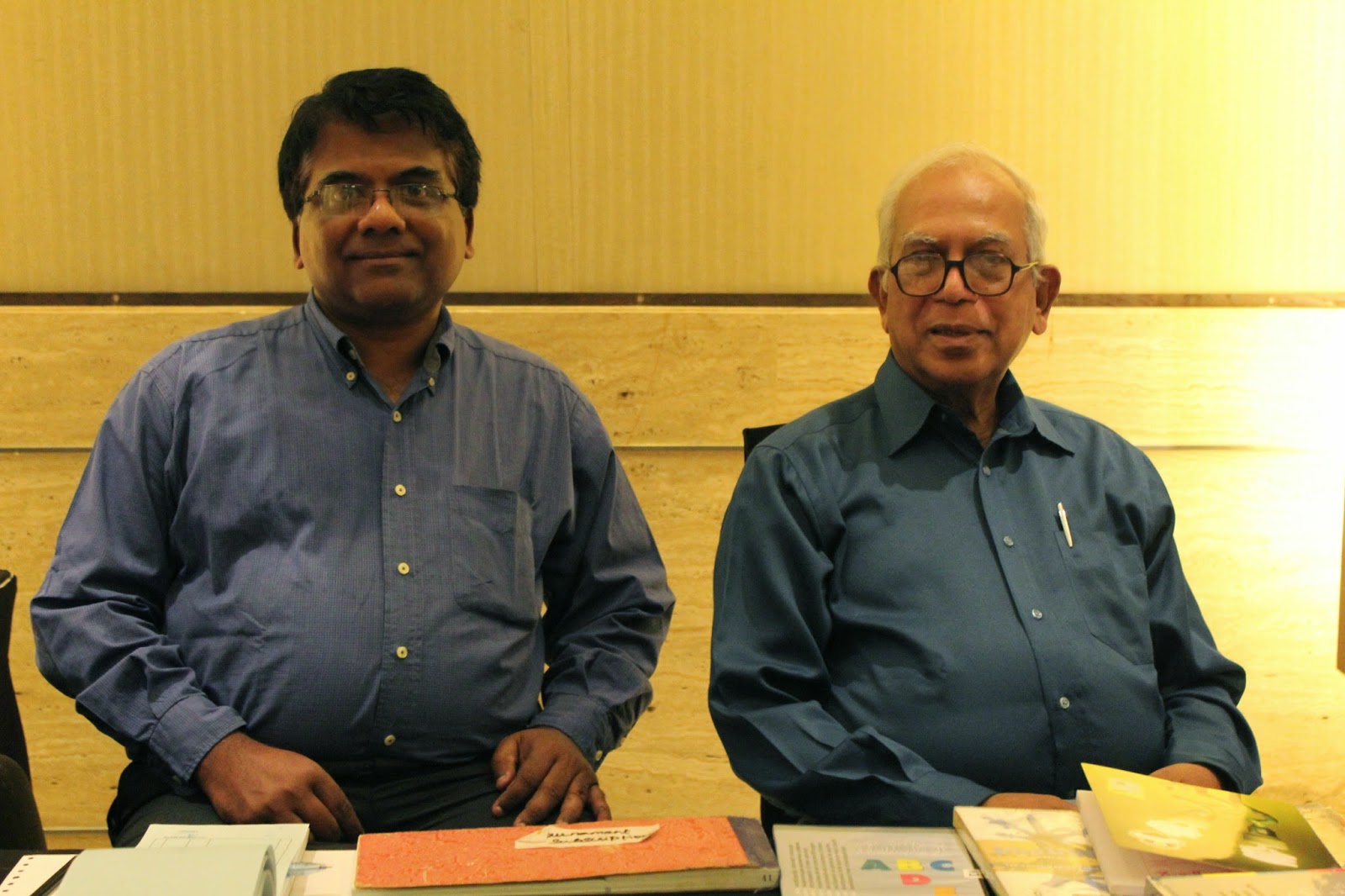 Father Manuel with his son Arvind. Both of them have successfully managed one of India's top chess magazine called Chess-Mate for years

Aaron was the only active chess player that India had in the sixties. India got its next international master V.Ravi in 1978. That means Aaron was one man army for nearly 17 years in Indian chess. He won the National title nine times. 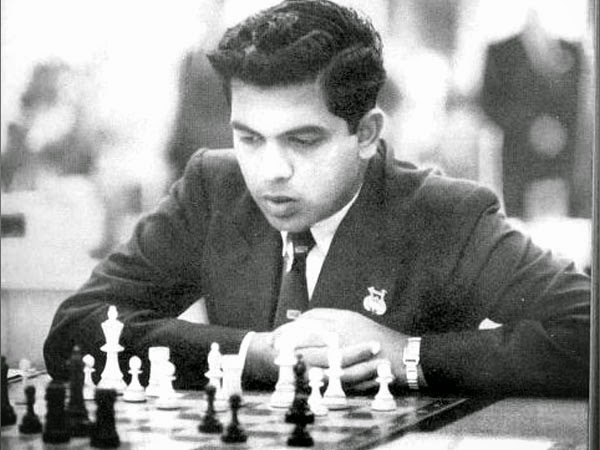 He became one of the strongest chess players in Asia and qualified for the Stockholm Interzonal in 1962. It was an amazing tournament with all the top players playing in it. Look at the top players of that tournament.

Aaron finished last in the tournament but not before he had inflicted defeats on two great players Portisch and Uhlmann.

Here are both the games for you to have a look:

Even against the great Bobby Fischer, Aaron had a pretty decent position but I guess he lost due to some excessive respect for his opponent.

Aaron had even beaten the fifth world champion Max Euwe with a huge pawn storm: 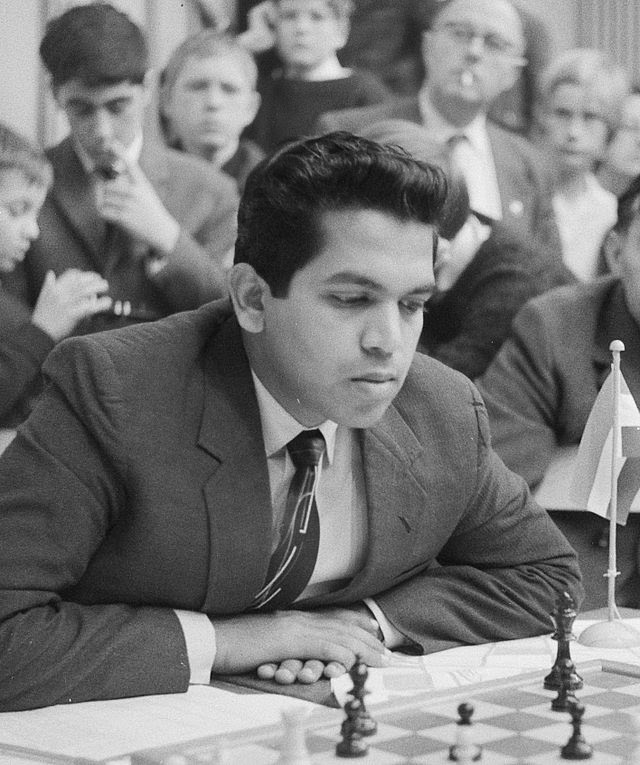 A player who has faced the best!

Today I take this opportunity on behalf of all the chess players of India to wish not only a happy birthday to Manuel Aaron but also to thank him for making chess one of the most popular and lovable sports in the country.
Without your efforts sir, it would not have been possible.

The "Thanksgiving" is a festival celebrated in United States of America every year on the fourth Thursday of the month of November. People thank each other for the various things that they are grateful for in their life. GM Maurice Ashley, who is known to think in offbeat and unorthodox fashion decided to thank the chess world by composing a beautiful little study. 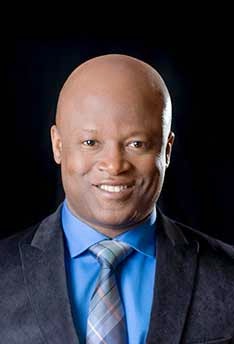 A small google search on Maurice shows that he is not only a chess grandmaster but also a commentator, author, app designer, puzzle inventor and motivational speaker! Truly a multi-faceted personality. And wait I almost forgot he is now also an organizer and the highest prize fund open tournament in the world, "Millionaire Chess tournament", was his brainchild.

Let's have a look at the composition! 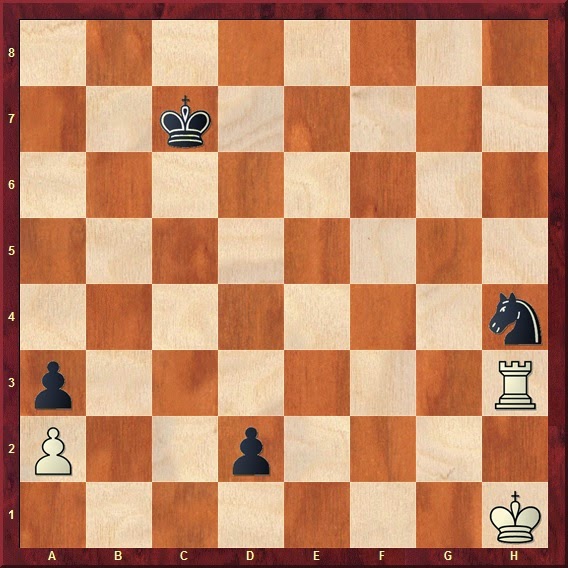 White to play and draw.
My suggestion would be to take 15 minutes on the clock and write down your answer. After attempting it, have a look at the solution given below.

SOLUTION:
The first thing that we see in the position is that the black pawn is about to queen. But we must always starts our calculations with a check or a capture. Taking the knight is futile as it met with d1=Q. Giving a check to the Black king with 1.Rc3+ is a little more interesting but after 1...Kb6 2. Rb3+ Kc5 3.Rb1 Kc4 4.Rd1 Kc3 The d-pawn is going to cost an entire rook after which the win is trivial. After having convinced ourselves that no checks or captures work we settle down to the only move for White and that is 1.Rd3. The d2 pawn is now attacked. But it is easy to see that black has the very nice retort with 1...Nf3! 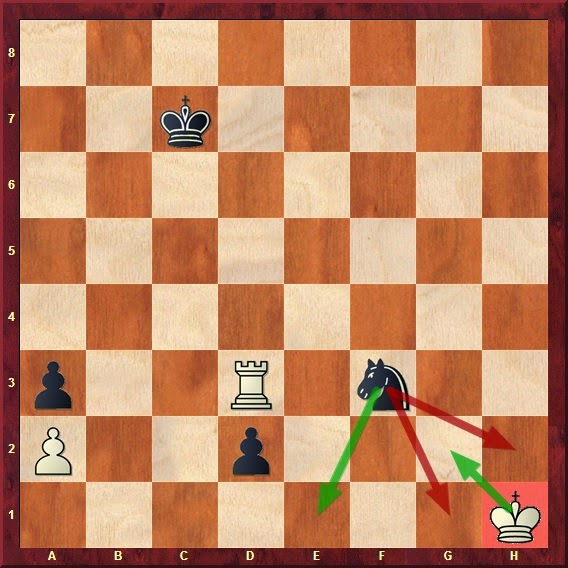 (W)
With this tricky little move, the black knight boxes in the white king. Kg2 looks impossible because of the fork on e1 and if the rook moves to d5 with 2.Rd5 then after Kc6 3.Rd8 Kc5 4.Kg2 Nd4! The view of the rook is blocked and the pawn is promoted.

We now understand that White is in a huge spot of bother. Black king is marching down the board and there is nothing much that he can do about it.
But there is a way out of this mess!

Before we move ahead I would like to discuss two theoretical endgames with you.

King vs knight + pawn on seventh rank
It is well known that a knight and a rook pawn win against the opponent's lone king. (Unlike the bishops there is nothing like a wrong coloured knight!) But there is one drawn position which you have to be aware of and that is the following one: 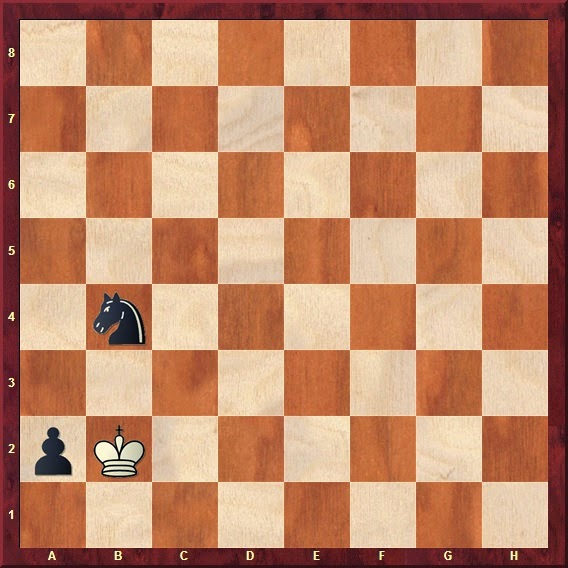 Place the black king anywhere on the board, it doesn't really matter. All that white has to do is shuffle his king between a1 and b2 to make a draw. If black king comes too near on squares like a3, c3, c2 or c1 then it would be a stalemate.

Thus, we come to the conclusion that the knight that supports a rook pawn on seventh rank is a drawn position if the opposite king can stop the pawn from queening. A rook pawn on any other rank supported by knight from behind it will be a win. Hence, this is a unique draw. 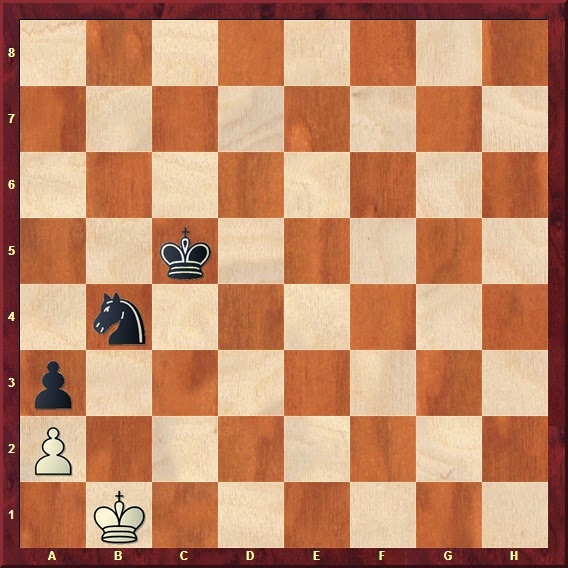 This position is also drawn irrespective of who is to move.

The white king keeps moving between b1 and a1 and there is no way to win. Once again, if the black king tries to come closer, it will end in a stalemate.

Knowledge of these two theoretically drawn positions is crucial for solving the Ashley study. If you do not know them you will be like Mr. Houdini who thinks that Black is winning. Don't believe me? Here is the proof:

As you can see on the lower right screen of the corner, Houdini 4 thinks that this position is won for black. It's time to prove it wrong! :) 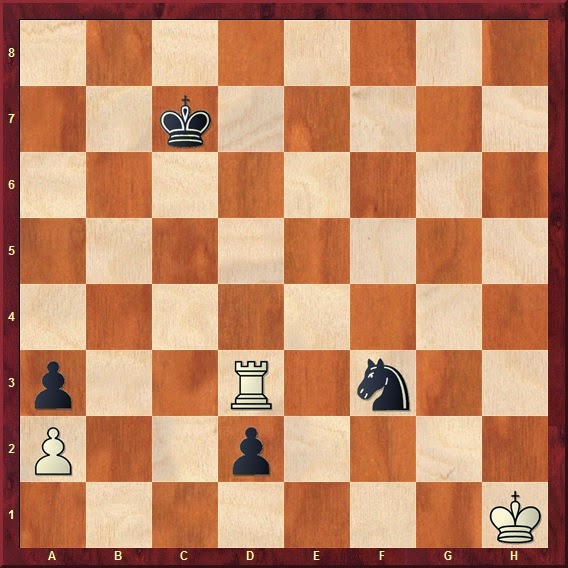 (W)
We can see the contours of the two theoretical drawn positions over here. All that we have to do is to eliminate the d2 pawn. How would you continue?

There are two different ways to get rid of the little guy on d2. One is playing Kg2 and the other is taking the pawn directly with Rxd2.
Which variation shall we begin with? I always prefer to start with captures and forcing variations and hence 2.Rxd2 is the move that I would analyze first. After Rxd2 Nxd2 3.Kg2 we reach the following position. 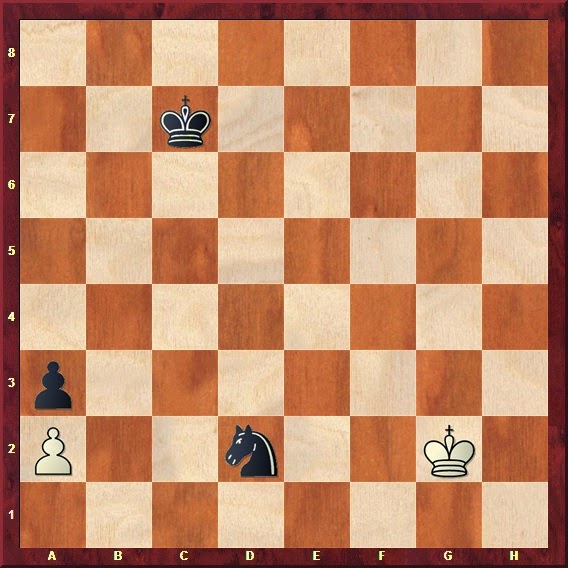 (B)
We already know that if the white king were to settle down on the b1 square it would be a draw. He is still quite a few moves away but we need to be accurate as Black. How should black play?

I personally find such positions extremely difficult to calculate, mainly because there are so many plans and possibilities available for both sides. Let us start with the most natural plan of capturing the a2 pawn. After 3...Nb1 4.Kf3 Nc3 5.Ke3 Nxa2 6.Kd3 Nb4 7.Kc3 a2 8. Kb2, the white king arrives in the nick of time to stop the pawn. 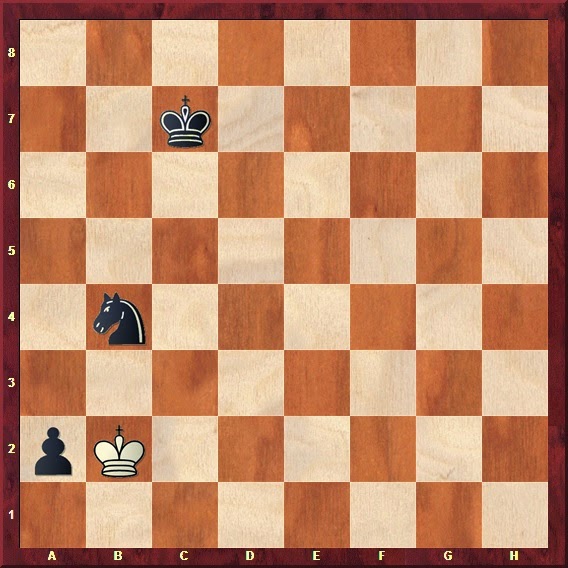 We already know that this is a theoretically drawn position.

(B)
So is this position a draw?

No, it is not. There is a win in there which is not so easy to find but strong technical players like Karpov and Kramnik would solve this position very easily. And how exactly do they do it?
They think of the positions that their opponent would want to reach and try to stop their idea. Long term prophylaxis you can say!
In the above position, white would like to get his king to b1 to reach a theoretically drawn position. Now is the difficult part. We have to put all our energy as black here and try to stop the idea in the best possible way. I am sure if you give your 100% you will be able to find the winning setup of putting our knight on c3 to prevent the king from coming to b1 and the black king on b4 to protect the knight. 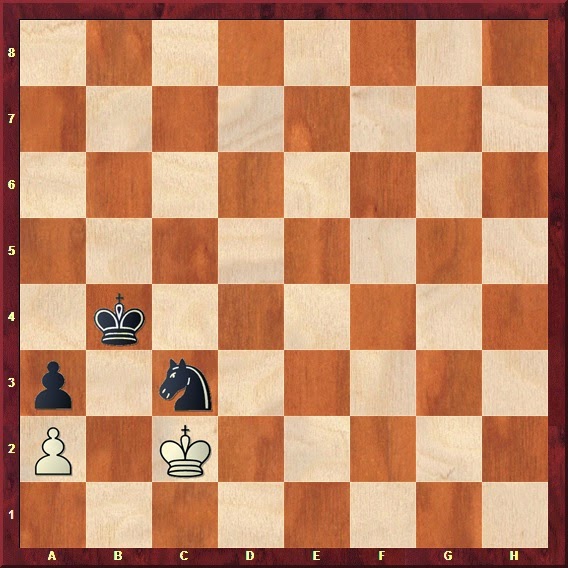 And there you have it! The white king has been prevented from going to b1 and next black takes the pawn on a2 and doesn't make the mistake of pushing his own pawn to a2. He will first bring his king to b3 and then play a3-a2 to earn a well deserved full point.

We now understand that 2. Rxd2 doesn't quite work. What is now left is the second option with 2.Kg2! 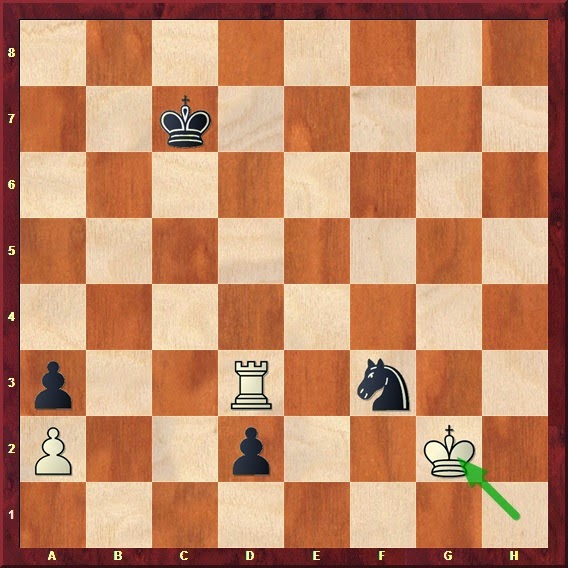 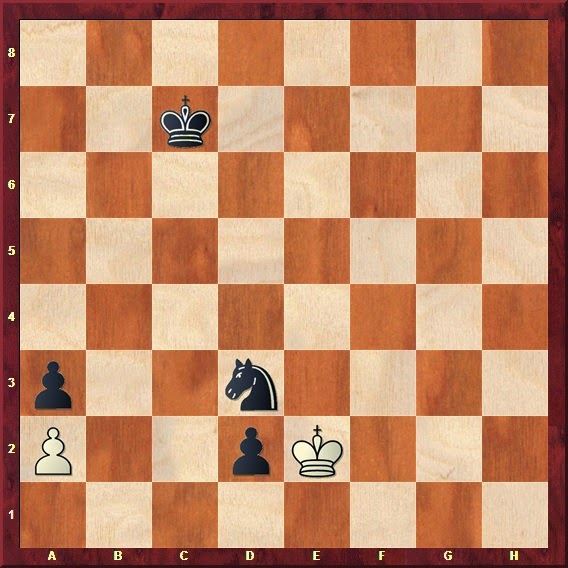 (B)
White wins the d2 pawn and in much more favourable conditions than in the last variation. His king is much closer to the queenside, especially the b1 square.

It's a draw! I have shown you this position so many times that you are not going to forget it for the rest of your life.

As you could see that in order to solve the study successfully you not only needed the theoretical knowledge of two positions that we saw but also hardcore calculating and execution skills in order to decide between 2. Rxd2 and 2.Kg2. As it turned out the latter was the right way to start.
Congratulations if you were able to solve this position correctly. We must definitely thank Maurice Ashley for composing this beautiful study. 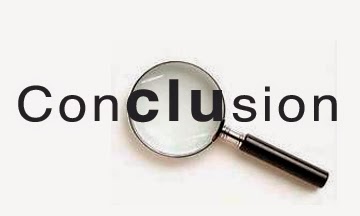 By solving this position I came to a very important conclusion which I would like to share with all of you:
There are two very important things that a chess player must possess in order to improve.
1. Sound theoretical knowledge (opening, middlegame and endgame)
2. Strong execution (calculating) skills. 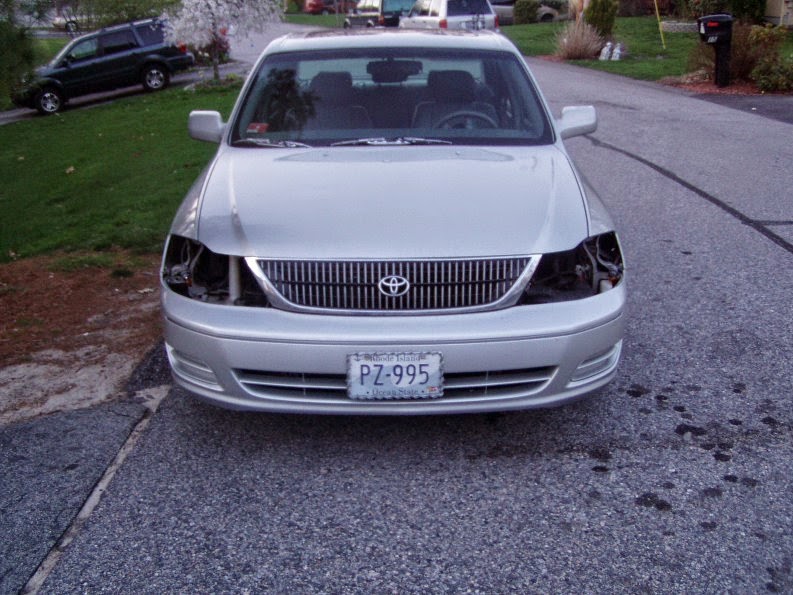 Lack of theoretical knowledge with good calculating skills is like going in a car without headlights on a dark road. You will keep moving but you don't know whether you are going in the right direction. Not to mention, a huge accident might just be waiting to happen! 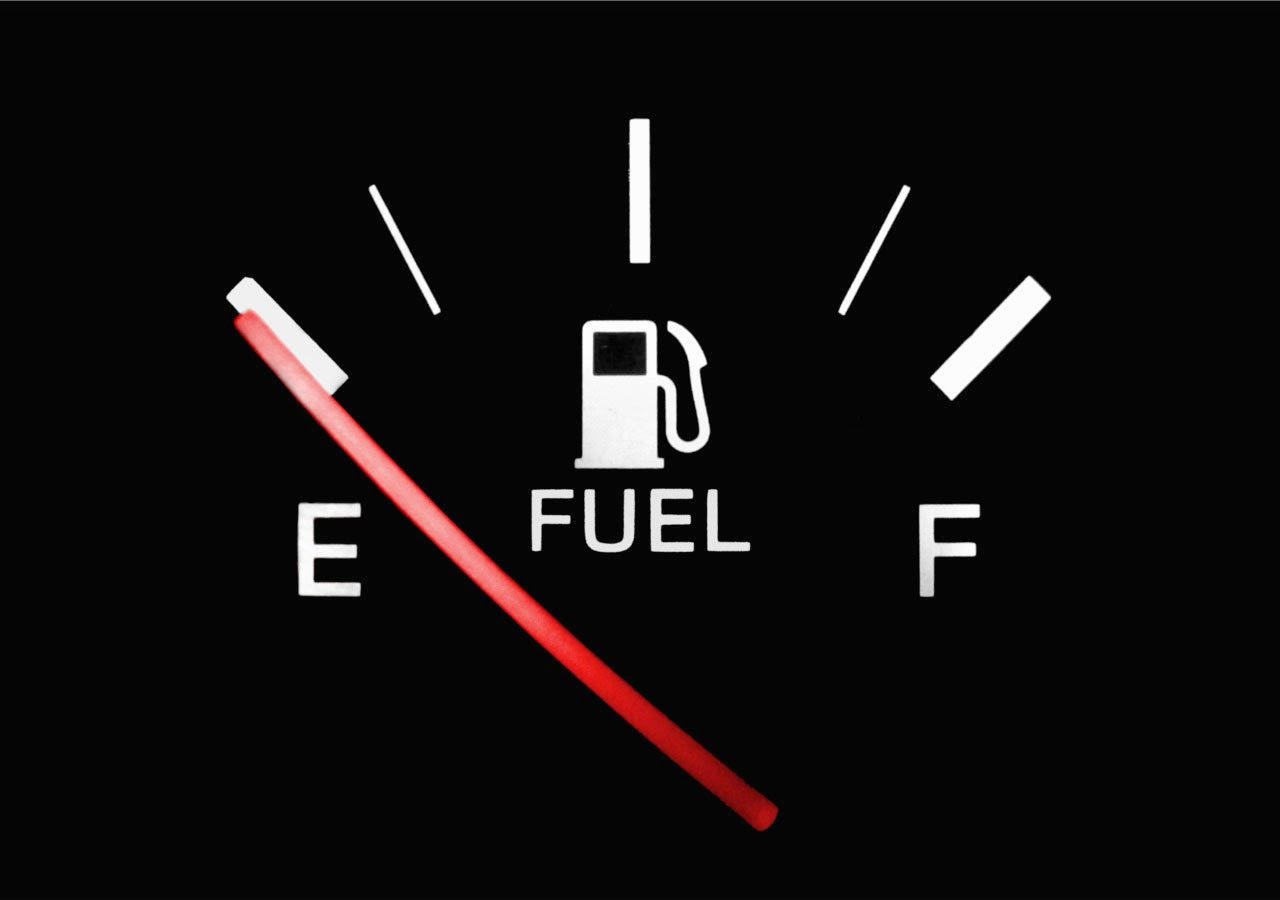 At the same time good knowledge without execution skills (calculating ability) is like going in a car that has run out of fuel. You can see where you want to go but just don't have the resources to reach there! :) 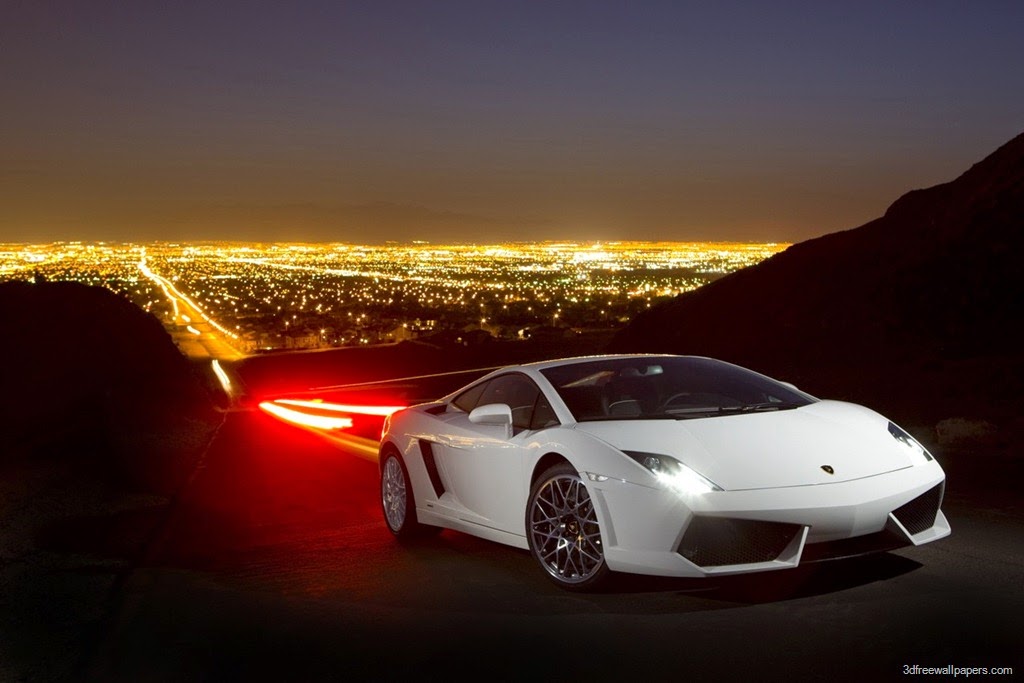 Improve both the above mentioned skills and you will zoom ahead on the road of chess improvement!