It's been years since I have written on my personal blog. Well, the reason for it is because I post chess stuff only on ChessBase India now. However, the subject of this article is too personal to be posted on ChessBase India. In 2018 I worked hard to promote blind chess in India. I wrote multiple articles making people aware about these warriors, I trained the team for World Team Championship in Bulgaria and also for the World Juniors in Poland. Soundarya winning the silver at World Juniors was a nice feeling for all the efforts that I had put in. But more than that I valued their friendship. I enjoyed being with the blind players and liked the fact that in spite of all their limitations they were ready to give it their all.

I worked as a coach and promoter of blind chess because I truly believed in their efforts and abilities. Money was not the motivator and I did all of this voluntarily without charging the blind chess federation anything. Somehow this letter by Kishan Gangolli, the six-time blind national champion, gives me the feeling that I must have done some right things!

I am posting this here so that at some point in my life I can read it and feel inspired to take on new challenges and try to make a difference.

"I am writing about a writer whose various writings popularized chess in India as well as all over the World. Entrepreneur, writer, Charted Accountant, good chess player, good coach......  In one word we can call him chess all-rounder. He is none another than Sagar Shah. The man who brought many chess players to lime light by giving them coverage through social media. In India, chess is the game which has got the least attention from news media. Popularizing through social media. Hat's off to that thought!

I am writing this article not to praise him or ChessBase India but to give clear picture of reality.  Many of you read various articles written on visually challenged chess players performing well in Bulgaria and Poland but these articles didn't throw light on coach and his efforts. This motivated to write this article.

Before taking you to World Team championship for Visually Challenged, Bulgaria, I would like to take you people few months back. In December 2017,  National B Chess championship for visually challenged was held at Ambala, Haryana. After winning the tournament I called Dr. Charudatta Jadhav, God father of blind chess in India telling him that I am not going to play in National A for visually challenged which was going to held in few days of time because of clerical exams which was going to be on same date of National A. But Charu sir told me not to miss national championship for just a clerical job and he said that there are a lot of things to change in blind chess most important one being ChessBase India coming to National A to popularize blind chess. 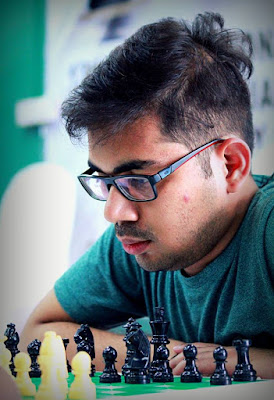 Kishan fighting hard at the National A for blind 2018

This was the situation again where I had to take the right decision. Either to choose chess or studies. I again chose Chess but this time only reason I chose chess because my story should reach people. ChessBase India helped me to do this. I had met Sagar couple of times before he became International master and before he founded ChessBase India. I knew that he is humble and good hearted but was not sure how my problem will be solved. Days passed I got frustrated and went into depression. Then decided to quit chess before National A. Rest is history. The only support I had that time was from Dr. Charudatta Jadhav and Sagar Shah.

In February 2018, ChessBase India team was in Mumbai to popularize blind chess. There I came to know that Sagar Shah will be our next coach. The first thought came to my mind was it will be nice that we will be getting publicity. Then I imagined he as a coach. I mean to say a person who just 2 years elder than me and who is calm, simple and maybe he has never scolded anyone in his life. Altogether I felt it would be fun to work with such a polite coach. But believe me I was wrong. 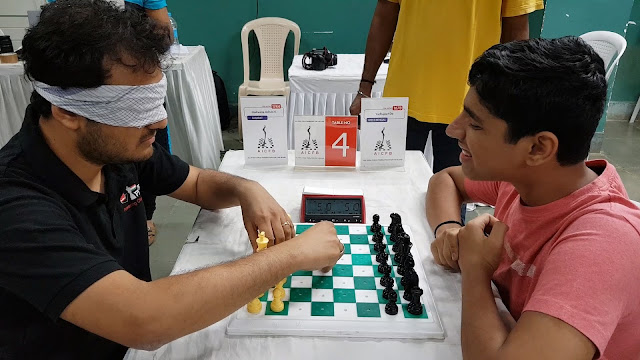 Understanding the blind players better by being in their shoes

He was just like Kabir Khan of Chak de India movie. Probably I am the one in India team who got many scolding for my mistakes. Some days after National championship I remember I had commented on one of my team mate post that it is difficult to win gold medal at world team. After maybe one month he called me and we were having normal conversations but suddenly he stated pointing out on my mistakes and asked me to correct it. I was bashed half an hour on phone for not being confident. At that moment I didn't understand what was going on. But he was right - confidence is the first stepping stone towards success. His words 'Faking to making’ will always be inside my ears. Until that time no one in my life questioned me the way I think. That day whatever he said more than anything else I understood that life is not going to be easy with him. Believe me the same thing repeated whenever I did something wrong. Fun to work with the politely strict coach.

In April 2018,  Karnataka state championship was conducted at Bangalore which was sponsored by Akshayakalpa Organic milk with cash fund of Rs 10 lakh (biggest in Indian chess history).  He was there to cover this event. One day prior to this event I went to his room for coaching. All other team mates joined through Skype.  He had food poisoning and was so ill that he was not in a position to speak. Despite his bad health he took classes for all of us. His only vision was to improve strength of Indian team. His observation skill is really good. He understood the thinking of all of us. He knew the personal life of all of us. The bonding with players became so strong that I remember some of my team mates shared few things which they didn't share with their parents.

After the last round in Kolkata GM open,  I was expecting him to bash me in the same way which he did earlier for not playing well but to my surprise he was giving me suggestions to improve my talking skills and also to open up and mingle with people. He gave almost half an hour lecture on this. What ever he said of course entered my ears but not my head. The next moment he introduced me to  few people. Guess what?! I said hi to them and kept quite. All his lecture had been wasted. Then I was assigned with a work of speaking with any two grandmaster in the tournament. Of course I couldn't do that. Maybe the only unsuccessful effort in his life was to make me talk!

Time passed very quickly and after many online sessions finally the camp was conducted by AICFB before the world Team Championships. One week camp was almost kind of military training for all of us. Early morning some exercises and then 9 a.m. to 7 p.m. coaching session and same thing repeated. Things became crazy when we were not allowed to eat chocolates, ice cream and such other sweets. After a lot of hard work and struggle we went to Bulgaria for World Team Championships. I was not so happy with the team composition. At first I felt it's a gamble to put me on the first board  because Board 1 of other teams will also be very strong and there was no guarantee that full point will come in lower boards. More than that I am giving up an individual medal if I played on board one. I was 100% sure I would have won the board prize if I had played on a lower board. But later I understood the importance of me playing on board one.  I had seen only the negative side of it but he was thinking from a long term point of view. He was right, in team games burden should be on multiple shoulders not on one. I gained confidence to fight hard against IMs and GMs.  I am sure this will help me in next tournaments.

The team going to World Team Championships in Bulgaria

Finally every one was sad because we lost both the final rounds. Next day early morning we had a flight to catch but at dinner table he was asking everyone whether we are interested to work for some time. I said what? Who will work after the tournament? His main intention was not to get medals immediately but to improve our overall strength. That's why I call him Kabir Khan who troubles the players by giving tough challenge but intention was to improve the quality. Even today I am feeling sad that we could win medal at Bulgaria. Success is measured in terms of medals but not in terms of potential strength. Efforts of AICFB and Sagar Shah was not rewarded. I am happy that my brother from another mother Soundarya Pradhan won silver medal at world junior championship for visually challenged and gave us opportunity to rejoice but winning a team medal remains a dream."

Soundarya Pradhan with the silver medal at the World Juniors 2018 | Photo: Amruta Mokal

This is one of my favourite pictures from the World Juniors. Our connecting flight was after six hours and in the waiting area of Zurich Airport we worked intensely for nearly two hours. After it Soundarya told me, it was one of those sessions which opened new possibilities related to calculation in his mind.

In April 2019, four blind players will play in Italy for the World Individual Championships. Three of them are the same from the team in Bulgaria - Kishan, Subhendu and Aryan. The fourth one is Krishna Udupa. I wish them all the best. There is no guarantee that I will be the coach of the team. One thing I have learnt in all these years of working to promote chess in the country is that even the best of intentions and hard work will not always give you the desired results, because there are always forces that are beyond your control. But, still in no way should you stop giving your best. For all the work I did with the blind team I improved in every aspect as a human being, I learnt a lot from each one of them and I got this valuable words of praise from Kishan. Something that I will cherish forever.
Posted by Sagar at 1:43 PM 1 comment: