I have never met him personally. Never spoken to him on phone or Skype. Dont really know much about his personal life and accomplishments! Its only recently that I have started chatting with him on facebook, but my bond with him goes back over the years!

One thing is sure: He is one guy who has made a deep impact on the way I think about the game of Chess.
Yes, my dear friends I am talking about the American Grandmaster Jesse Kraai! 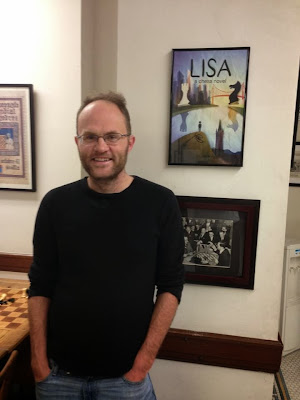 He has an elo of 2518! And I dont need to jot down his chess achievements! The fact that he is a GM explains a lot of things about his chess strength!
But the thing that I admire most about Jesse Kraai is his approach towards chess! I like to call it a philosophical approach towards the game!
In the year 2006 when I was just a 2000 player, I subscribed to a site called www.chesslecture.com.
Well this site was pretty normal having 1 lecture everyday by a master level player. But there was one person whose lectures used to be just mind blowing! He was Jesse!
As Jesse would start to speak I would really not know how the time would fly by. Even simple and banal topics like why is the center important or the relation between quality material and time were so wonderfully explained by him.
In fact it was because of Jesse that I learnt the Bishop+Knight mate properly. Its his approach towards the game thats important. While many people would say, learn bishop and knight mate because you dont want to be embarrassed when you get that position. And many others say, its once in a lifetime thing, why bother wasting time on it! Jesse made me understand why it was important to learn the mate (of course through the lecture!)
According to him: The Bishop and Knight mate teaches you the art of co-ordinating your pieces!

I love his lectures because they are intellectual. It makes you feel that you really are playing a royal game! And such fluency of thoughts doesnt come just like that:
Jesse owns a Ph.D in  Philosophy from the University of Heidelberg!

I considered myself to have balanced my education and chess quite well, But when I came to know that there exists a guy in USA who is not only a GM but also done Ph.D , my mind was blown!

And now Jesse has written a book called Lisa! 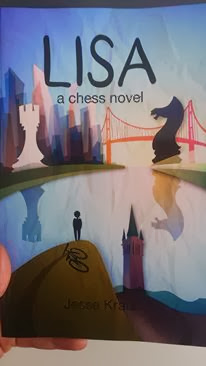 I was so excited to read this book when the book was published around 15th October 2013. I thought I would breeze through this book in a day or two! But believe me when I say I need almost 15 days to complete is 225 odd page book. It was filled with such great philosophical thoughts that almost every page made me think.
One of my favourite paragraph from the book was:
"You know," Igor said. "I notice that when man and woman together they always wish for talk about another couple. How do they live? What choices they make? It is a pleasure for consider own self in lives of other. Is mirror without failure,guilt or accusation.

So many times I have thought something like this but Jesse has written it in words in this book. A very tough job of translating complicated thoughts into words!!

It can also give you the right way, as Jesse likes to call it the Russian way to improve at chess!
I would strongly recommend this book but don't blame me when the book becomes extremely difficult to understand!! :D

When I asked Jesse as to how does he manage to do something which people do not manage in their entire lifetime i.e at such a young age to be a Ph.D, to be a GM and now to be an author!!, He says, he likes it when people say its impossible to do it! For all these things people told him its not possible and he set himself a target to achieve it!! I think this says a lot about the kind of man he is!!

My writing this post is a tribute to a great Chess thinker!
If ever you would like to know Jesse better, I would suggest you to make a one month subscription to www.chesslecture.com. It has an archive of almost 70 Jesse lessons which you can see!
I remember reading a rook ending book by Korchnoi who in the introduction writes that if you read this book, you shall increase your rating by 100 points!
I would say that if your rating is below 2200 and If you watch all of Jesse's lecture, your chess understanding will increase by leaps and bounds and your chess rating by atleast 100 points!! :)

And lastly one thing, I have learnt from Jesse which he has never explicitly mentioned anywhere, is that Quality any day beats Quantity!
To become a good player you don't need to read many books in a month, but it can really work out well if you read just one book for many months!!

Thanks a lot Jesse for everything that you have taught me in Chess!

His official website:
http://jessekraai.com/
Posted by Sagar at 6:10 PM