Mating the Castled King- A review

I played in the National Team championships from the 20th-26th of February 2015, Goa, with my team called "Chess Is Life". 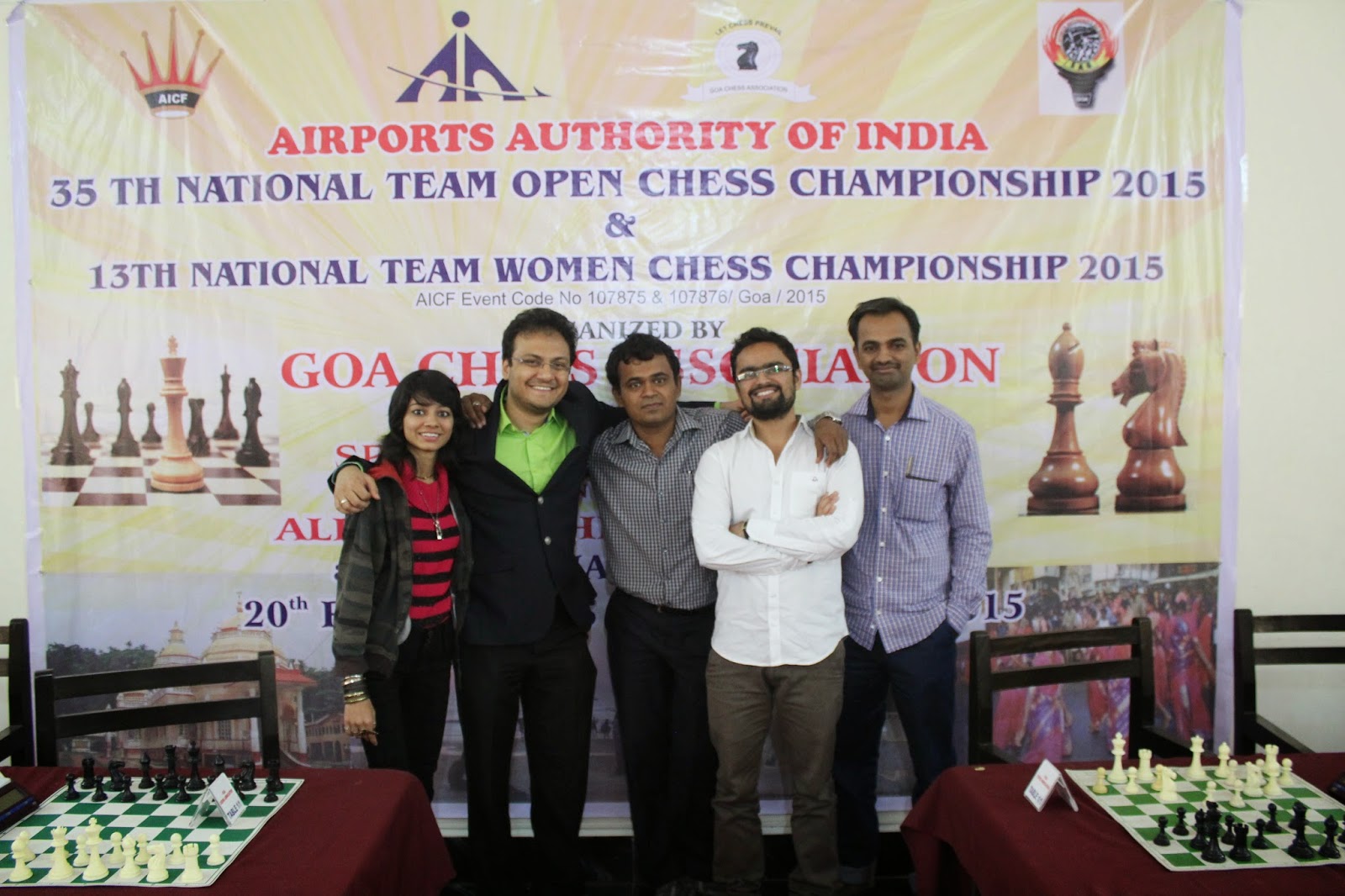 I played on the first board of the team and that meant facing some of the best players of the nation. For eg. PSPB had B Adhiban (2630) on the first board, Railways A had P Karthikeyan (2444), Railways B had GM Laxman (2377), LIC had GM Sriram Jha (2414) and many more strong players on the top board.

My main aim in this tournament was to play steady chess and not to lose a single game. Now considering the level of opposition this was not such an easy task. But I managed to do that. I scored 6.5/9 (4 wins and 5 draws). And I attribute this solid performance to just one book: "Mating the Castled King by Danny Gormally." I will come to the part of how the book helped me to achieve this task at the end of this review, but first let's have a look at what this book is all about. 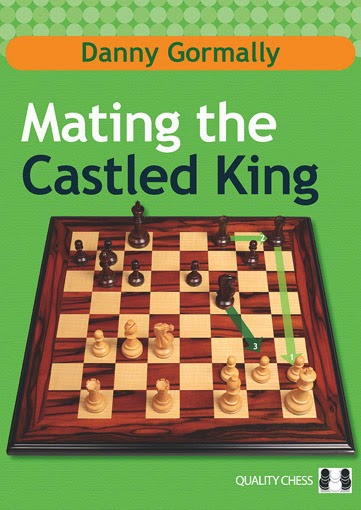 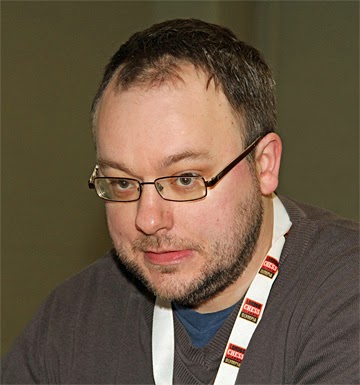 A quick search on the author reveals that he has been a very strong player with a peak rating of 2573 in the year 2006. I didn't have much idea about Danny Gormally apart from the fact that I had read about an incident which involved him from the 2006 Turin Olympiad.

As the title of the book suggests and the cover shows, this book is all about mating patterns against a castled king. The position that you can see on the cover is a very good example of how knowing the mating patters can make complicated problems look pretty simple. 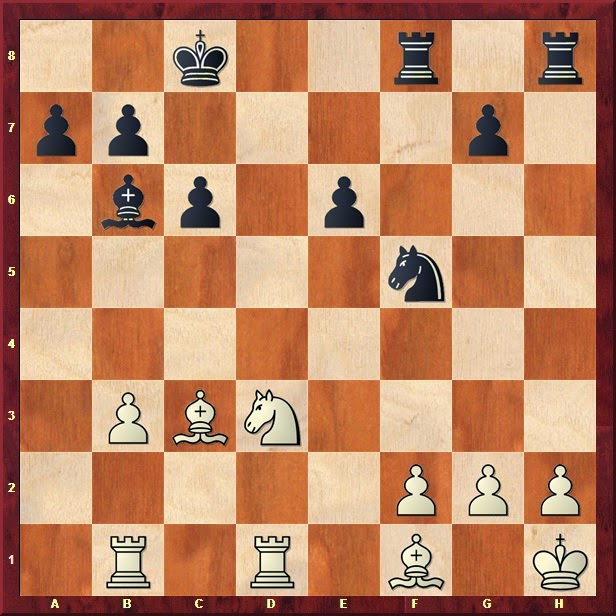 Black to play and win

For the uninitiated this position would take quite some time to solve. But for experienced campaigners, the combination is as natural as breathing! 1...Rxh2+ 2.Kxh2 Rh8+ 3.Kg1 Ng3! 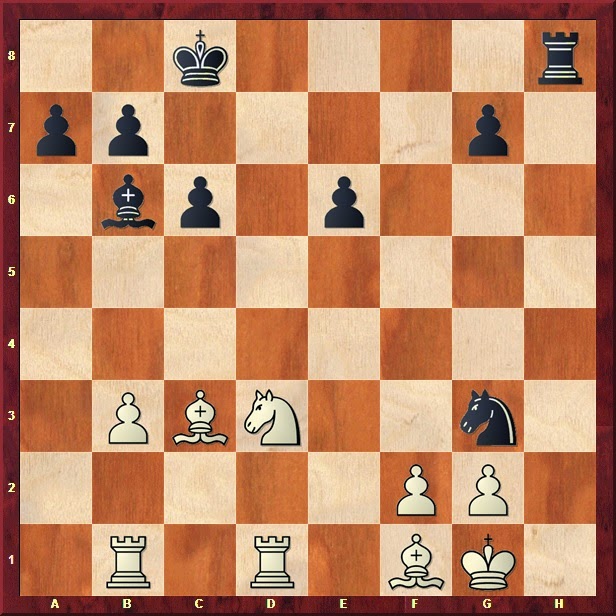 This is basically what Gormally is aiming for with this book. A player should become so well versed with the themes and patterns that he/she could find such moves by just drawing ideas from his tactical arsenal. This book helps you to build up that arsenal of mating patterns. And how is he going to achieve this nearly impossible task of acquainting us with innumerable mating patterns and ideas?

The author makes a very good attempt. After an introductory chapter called "A few helpful tips", Gormally gets down to business familiarizing us with 20 mating patterns. 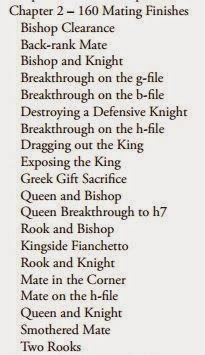 The 20 mating themes against a castled King

The most impressive part for me is that Gormally teaches you with examples that he has collected for each of these 20 themes. For eg. Let's have a look at the "Mate on the h-file" theme.

First there is small introduction like the one above where only the most important pieces are shown to you. This is done so that you can memorize the pattern and save it in your mind. 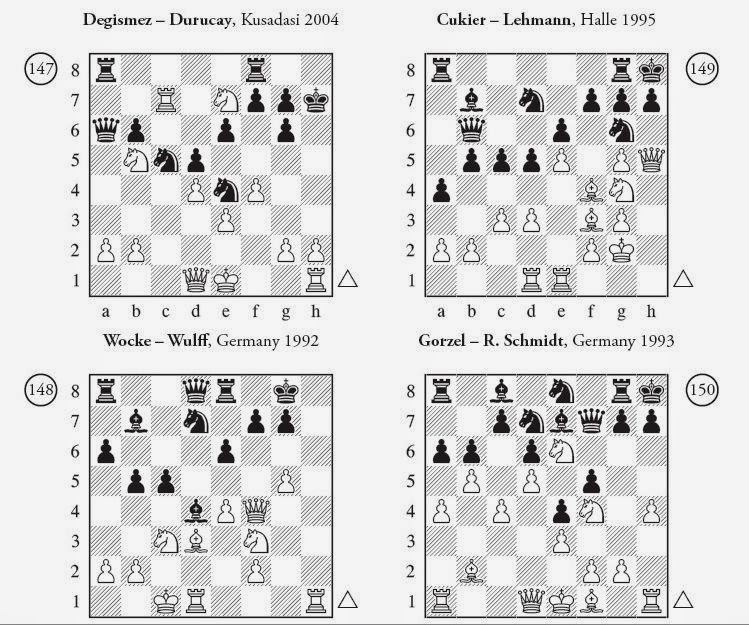 And then you have positions to solve based on the theme that is being discussed
The answers are given right behind the puzzles of a specific chapter which saves you quite some time in flipping through the pages.

In all there are 160 tactical exercises. A very important question to be asked is: What is the level of players that is being aimed here? I would like to share a very interesting incident that happened when I was on my way to the National Teams tournament. I was sitting in the train going from Mumbai to Goa and I randomly opened a chapter of the book. It turned out to be the pattern of "Rook and Knight."
Holland-Shaw 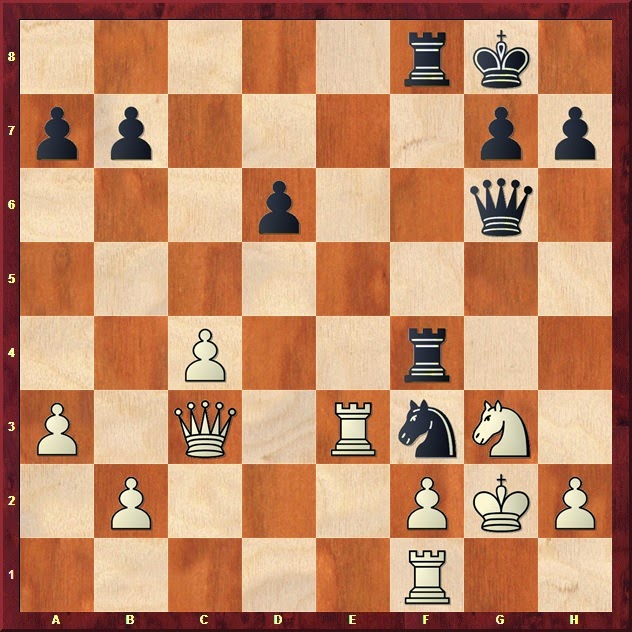 I then went to the next position:
Rodgaard-Touzane 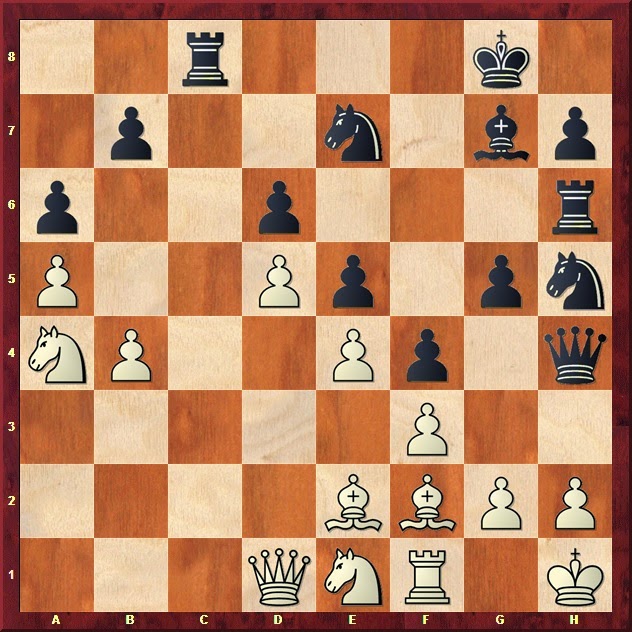 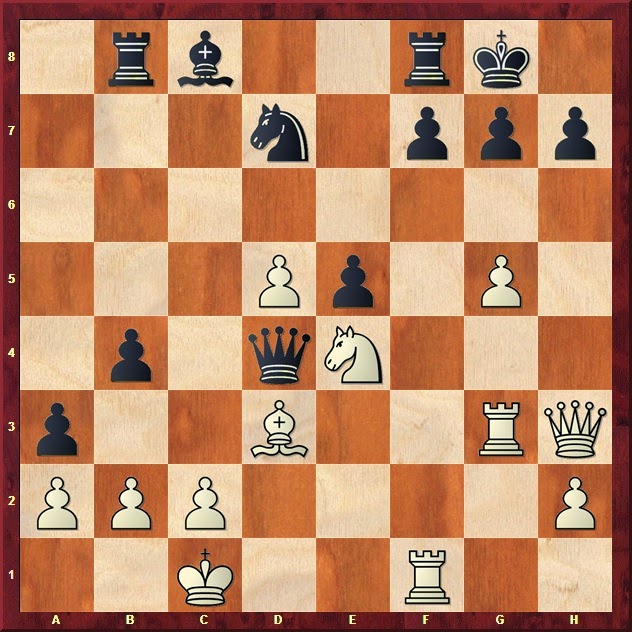 I had a feeling that I would complete this book within a day or two. I solved a few more and they all seemed not so difficult. Within just a few minutes I had reached the last position of the chapter. It was a position between Sunye Neto- Garry Kasparov, Graz 1981. 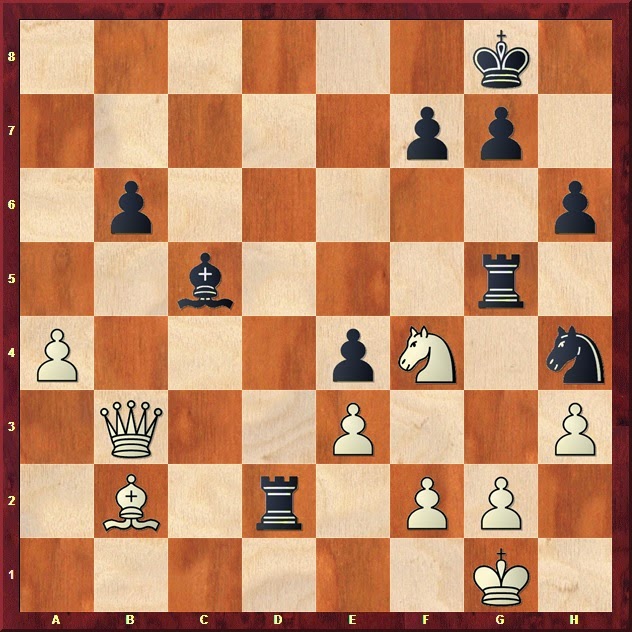 After solving seven not too difficult positions, it is quite possible that you tend to lose your sharpness. It happens with us in our tournament games too. If you face easy opposition for too many rounds, you tend to stop calculating the best moves for your opponents. Something similar happened to me. I just couldn't crack this problem easily. I wanted to quickly solve this one too and get it over with. But things were not so easy. 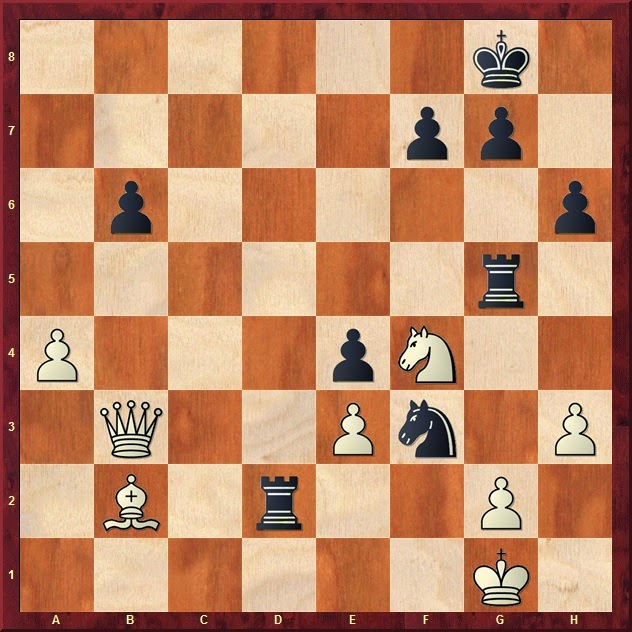 Where should the White king go to? Kf1 or Kh1

Both the moves looked plausible. 3. Kf1 was played in the game and I could instantly see a huge knight fork looming on d2 square. All that Black has to do is to clear that square with a tempo. 3...Rdxg2!
Even though Black is materially lagging, his attack his decisive. For eg. 4.Qc3 Rh2! Kasparov managed to create a strong attack and won the game in just three more moves.
Now the question was: What would happen to 3.Kh1? 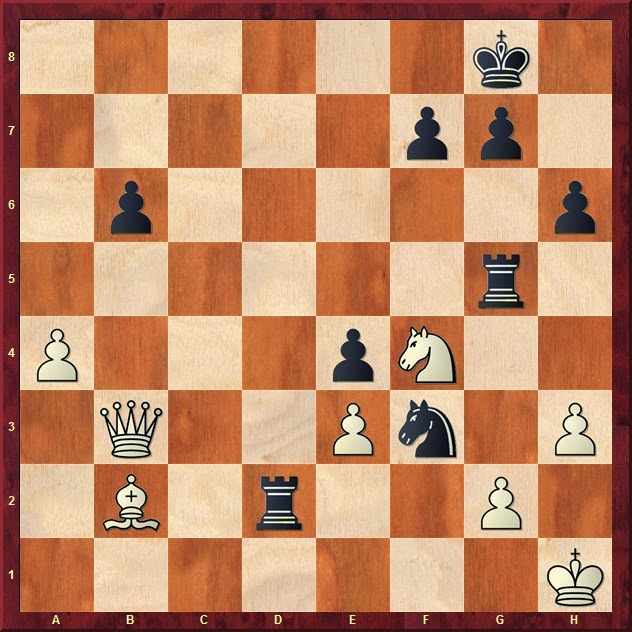 I was simply unable to find the winning combination. When I checked the answer I was simply stunned. 3...Rdxg2! 4.Nxg2 Rg3!! 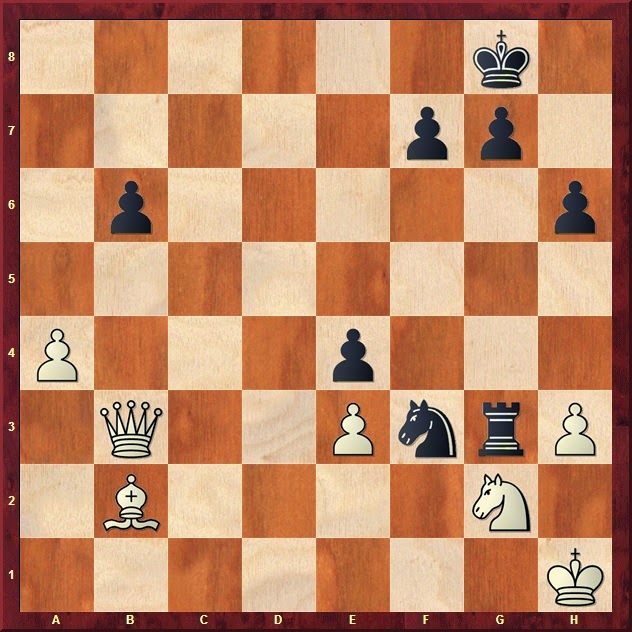 Frankly speaking, this was first time I saw such a configuration of Black and White pieces. The knight on g2 cannot move as it allows Rg1#. And if the knight cannot move then Rxh3 is a forced mate. This was truly a brilliant conception. Even Kasparov said he couldn't remember seeing such a mating configuration before.

This is the beauty of the book according to me. You really have to be alert. A few easy ones could be followed by a real gem and if you are not ready to think over it then you might lose the opportunity of learning something very important. 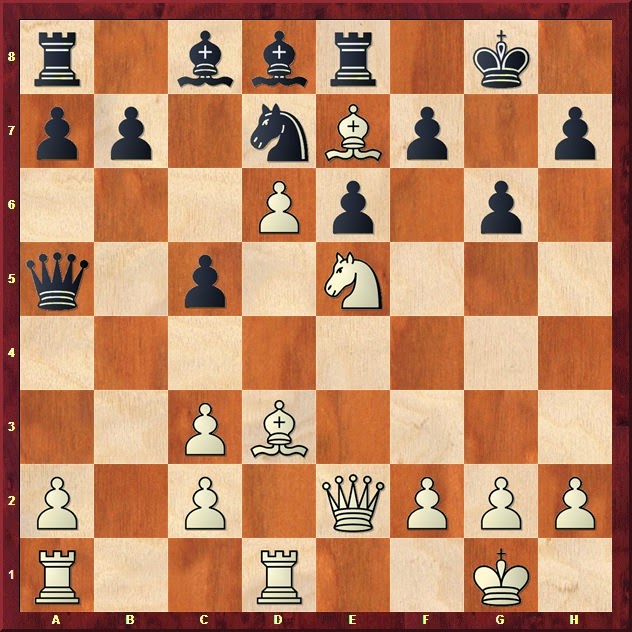 I tried to search this game position in Mega-Database but was unable to find it. I wonder how Gormally found this one but it surely is beautiful. The theme of this puzzle is "Dragging out the King." The first two moves are sort of obvious. 1.Nxf7 Kxf7 2.Qxe6! 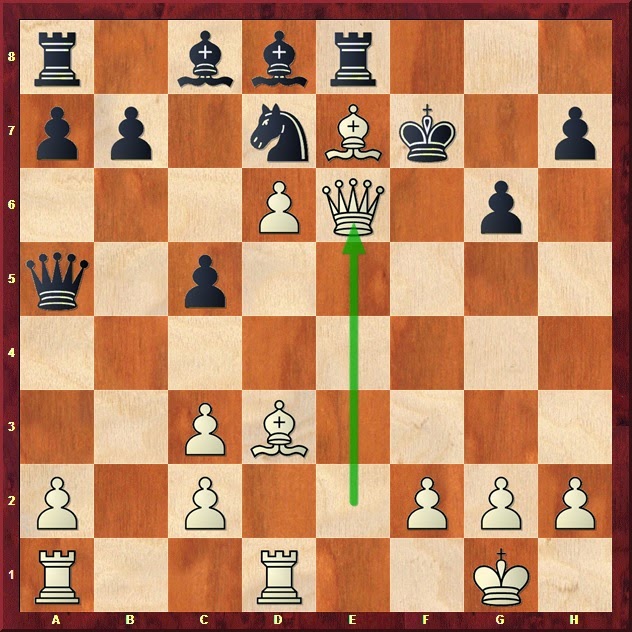 The fact that queen sacrifice is promising can be seen by a player of any level. But to calculate the consequences of the same is not at all easy. In fact this can be a difficult problem even for a grandmaster. Below I reproduce Gormally's analysis along with some additions.

The book is filled with such in depth analyses. The wonderful thing about this problem is that it is useful for a beginner who gets acquainted with the idea of dragging the king out and it is also useful for a grandmaster who will be aiming to calculate right until the mate!

So is going through this book going to help you to become a better player? Of course! My personal experience is that your mind will start seeing patterns much faster. Here is one example from a very recent game played by my wife, Amruta Mokal. 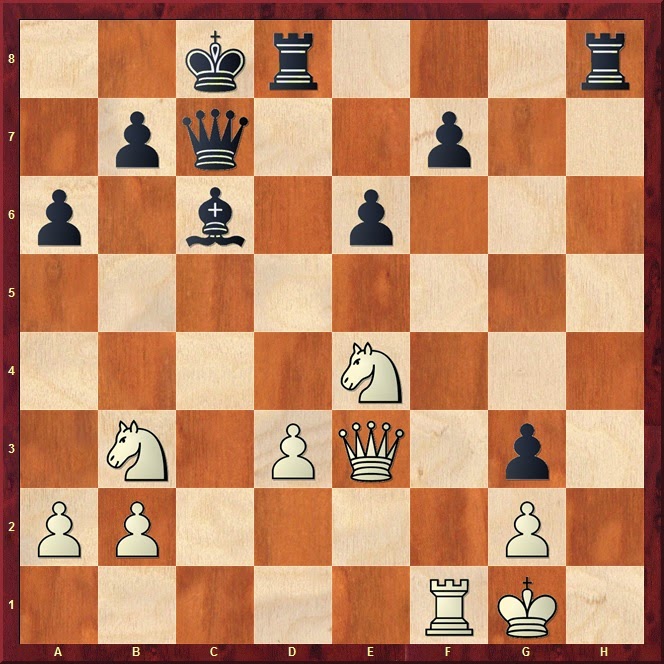 Of course, Black is winning in many ways. She could just play f5 or even double the rooks on the h-file. But Amruta played Qe5 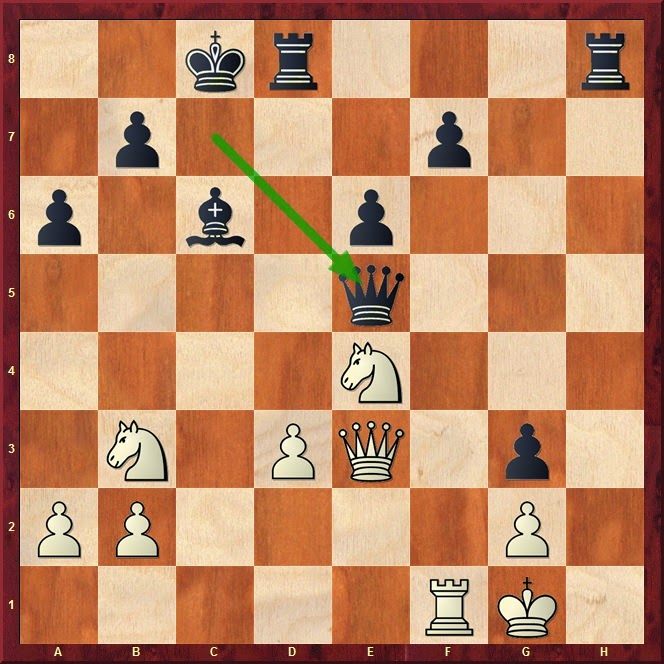 Did you notice her threat? Her opponent did not and after Qc5, she was able to execute the very nice mating pattern with Rh1+! Kxh1 Qh8+! Kg1 Qh2#.

The point that I am trying to make with this example is that the move Qc7-e5 stems from an understanding of mating patterns. By knowing the pattern of mate down the h-file, Amruta put herself in the best situation to execute the mating idea. If she didn't know this theme there would have been very few chances that she would have continued this way. This is what the book of Danny Gormally is going to help you with.
It is going to make you more aware of the little nuances of where each piece should be placed so that a mating attack would work. This will help you to plan ahead and your mating attacks will be much more target oriented than just sprouting out of serendipity. 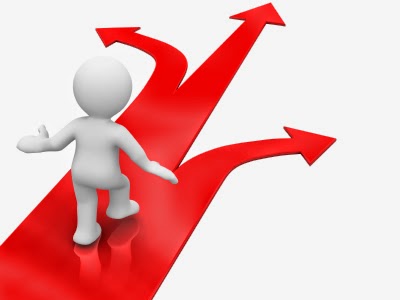 How I worked with this book

When I went to Goa, I setup my chess board on a table in my room. I kept the book of Mating the castled King next to it. Whenever I had some time, I would open a random page and setup a position from the book and solve it. After solving the position, I would just make a note with a tick mark that I had solved the position. Add a star or two next to the problem if I really liked it. In this way, I was solving almost 5-10 positions everyday. This helped me to stay in excellent tactical shape and I was able to remain unbeaten in the tournament. I continued working with the book even after the tournament and I am happy to say that I have completed the 160 positions. I must mention that there are two other chapters entitled "Breakthrough with pieces" and "Breakthrough with pawns" which have attacking games selected and annotated by the author. On a parting note, I leave you with an extremely impressive attacking game played by Danny Gormally himself. The game has been taken from Mega-Database and the analysis has been done by Viktor Mikhalevski.

Final words:
"A unique book which not only helps you to get acquainted with mating patterns against a castled king but also helps you to improve your art of calculation thanks to the excellent quality of analysis."

You can buy the book from the official website of Quality Chess for 22.99 euros and also read the PDF excerpt from here.
Posted by Sagar at 3:43 PM