Half knowledge is dangerous!

I have this habit of buying one chess book in every tournament that I play. In this way, my final aim is one day to open a huge library of chess books! And there are some tournaments when I really play well. Then I can use my prize money to buy more chess books.

In my Euro trip which ended just a month ago, I had two huge achievements.
1. I became an International Master (IM) in Spain
2. I won the Dresden Open 2014 and made my maiden GM norm in Germany.

In one of my past articles on this blog: People behind my IM title , I had mentioned that there are two chess authors whom I hold in very high regard. 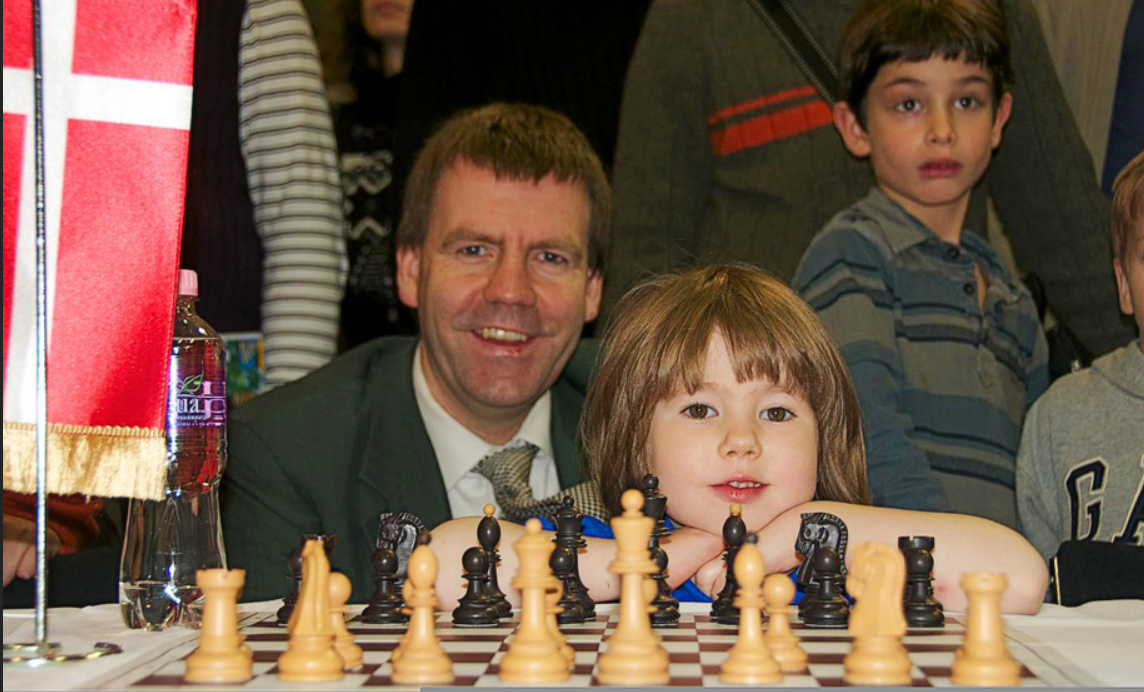 One of them is GM Jacob Aagaard 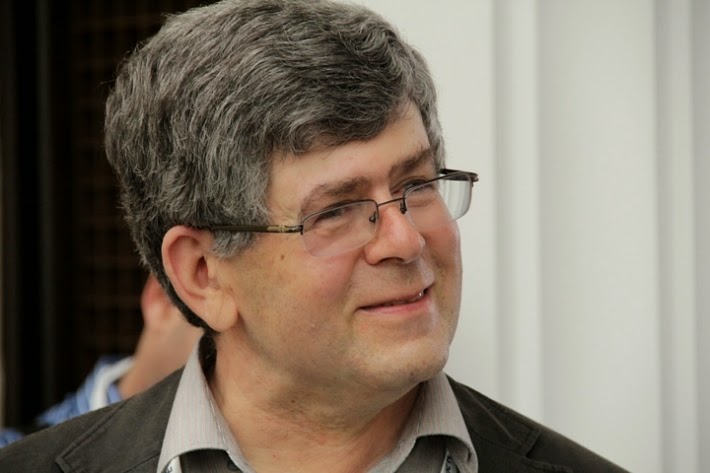 And the other is IM Mark Dvoretsky.

When I became an IM in Spain, my wife, Amruta, decided to gift me the latest book written by Aagaard. 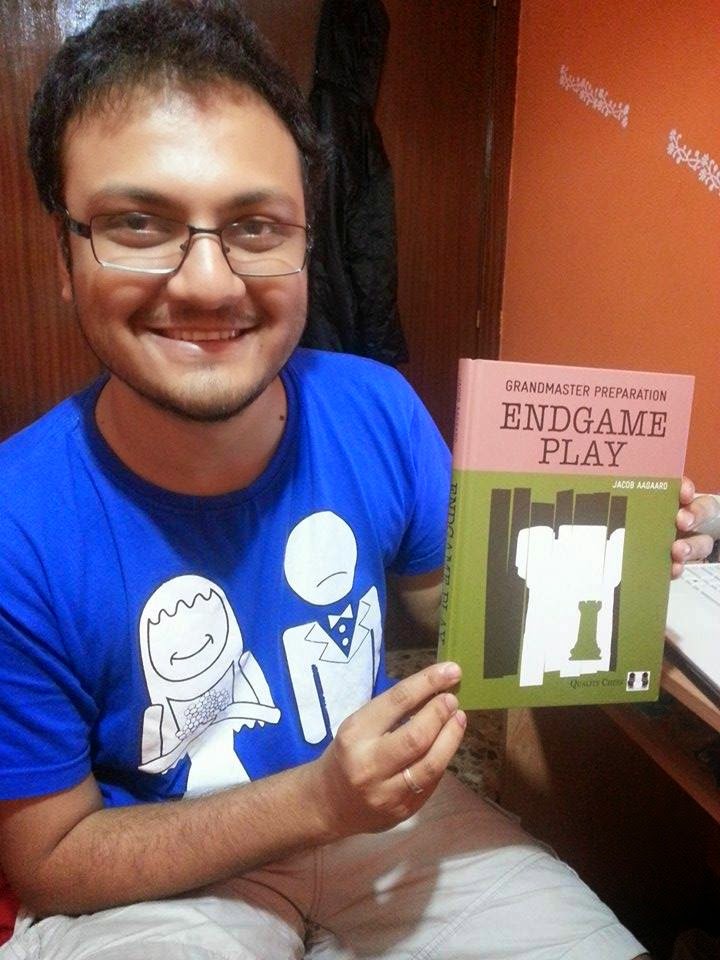 The fifth book from the Grandmaster Preparation series: Endgame play.

The book was pretty expensive. 30 Euros. That comes to nearly Rs.2400. So I had kind of exhausted my resources on book buying for the trip.

But then something amazing happened. 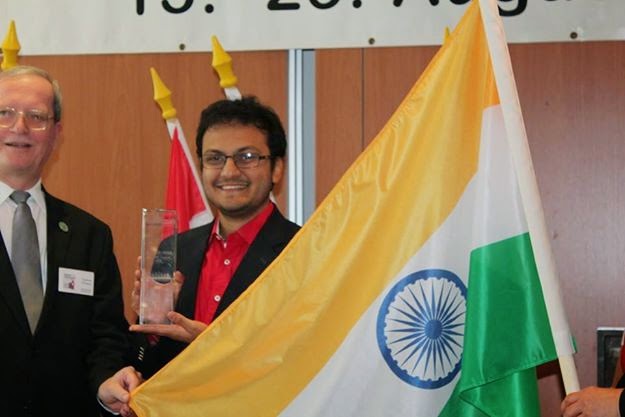 I won the Dresden Open 2014 and was richer by €2000
That meant I had quite some money to buy a few new books and I decided to buy one of Mark Dvoretsky books. 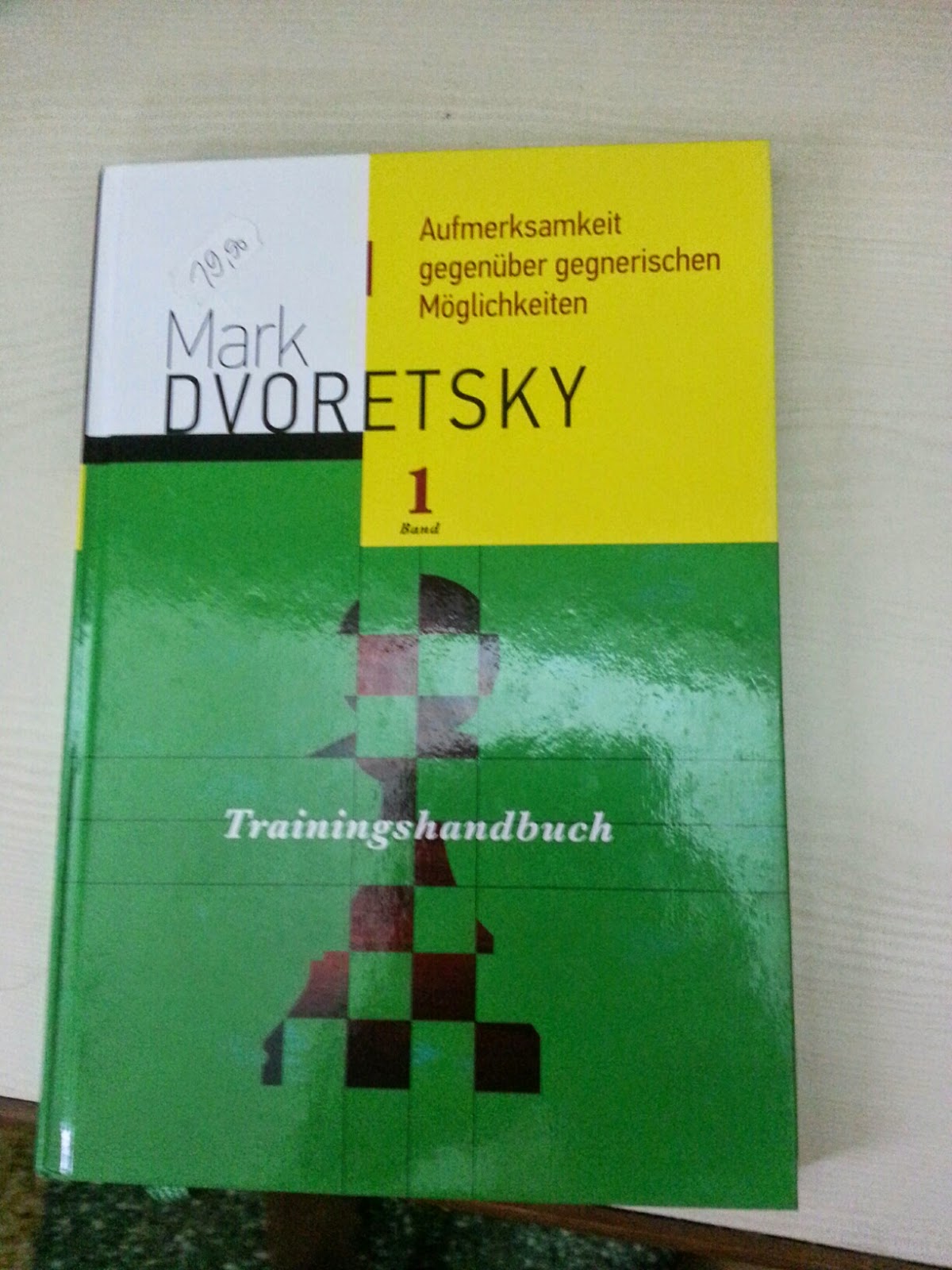 In German the title of the book read: Paying attention to opponent's possibilities. Though the book was in German, it was mainly a workbook. And had a lot of training positions. So I figured that language won't be much of a hindrance.

After coming back from the two and a half month Euro-trip I took some rest and when I was back to the chess board, I decided to work with these two books.
Usually what I do is to solve one page from each book every day. On 24th September when I sat down to solve, these were the positions in front of me. 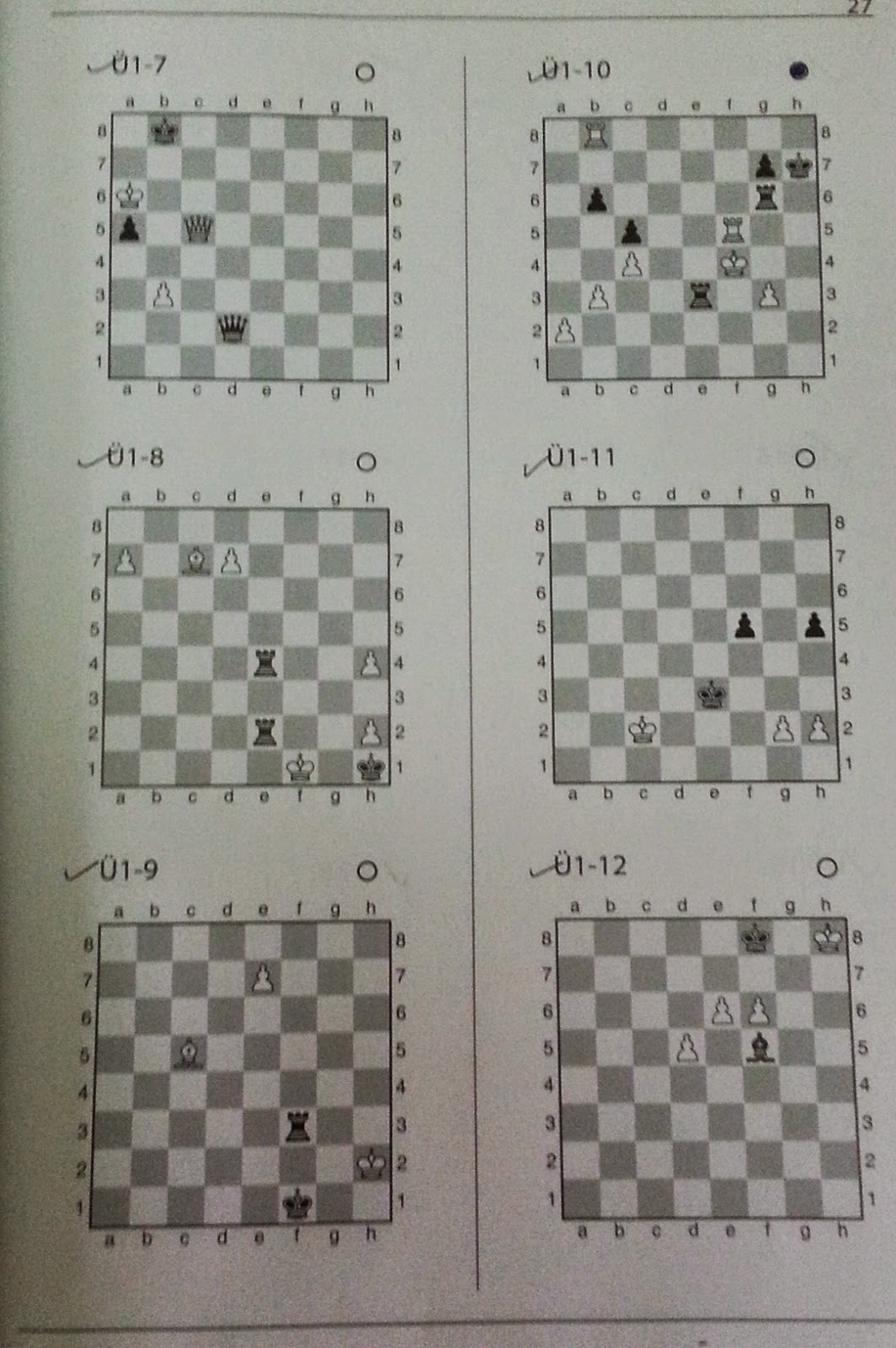 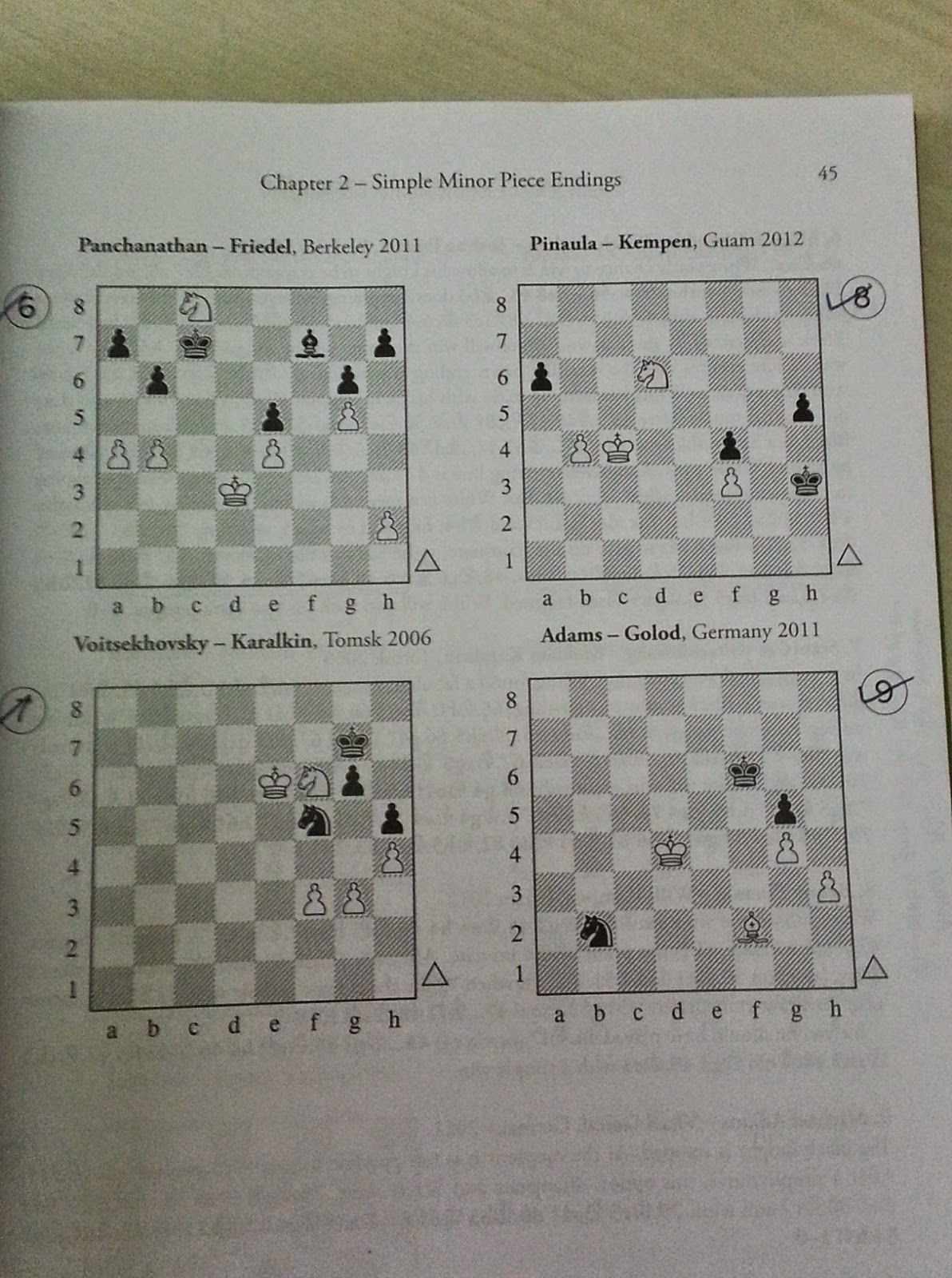 A little note about how I solve. I set the time on my clock (lets say around 45 minutes for the all the problems) and then I setup the positions on the chess board, solve them and write down the answer. After finishing the Dvoretsky problems, I would check the answers and then repeat the same process with Aagaard's positions. Bear in mind, I try to solve these positions very seriously as if it were a real game. Hence, whatever I have written below is when I was working with my maximum capacity and not as a leisure activity.

One of the positions from Dvoretsky's book that I would like to bring to your attention is the following: 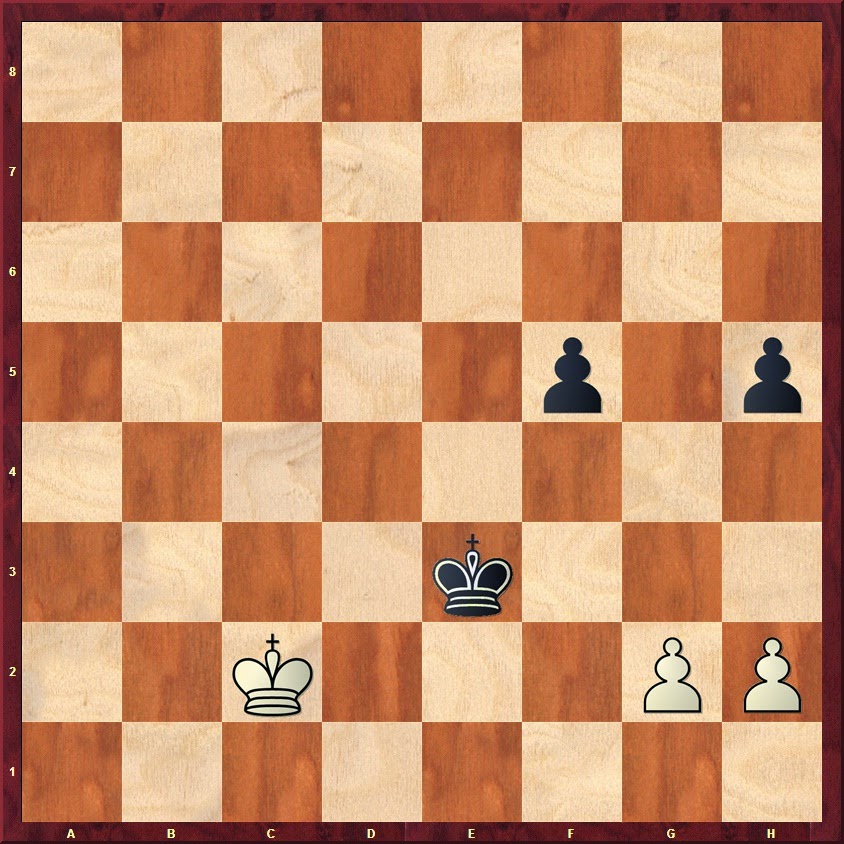 It's White to play. What should he do? 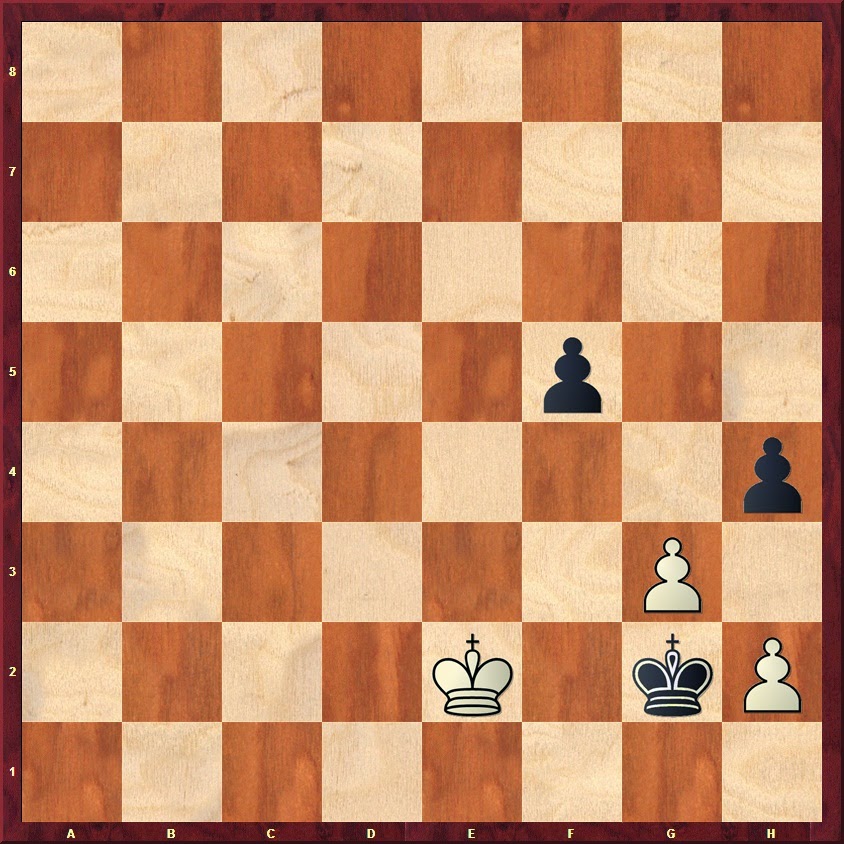 and after 4.gh4 f4! the fact that the white king is on e2 spells his doom as the f-pawn moves ahead with a check.

As you all must have understood by now, it was important not to commit your king's position. White must start with 1.g3! And after Kf2 2.Kd3 (or Kd2) Kg2 3.Ke3! 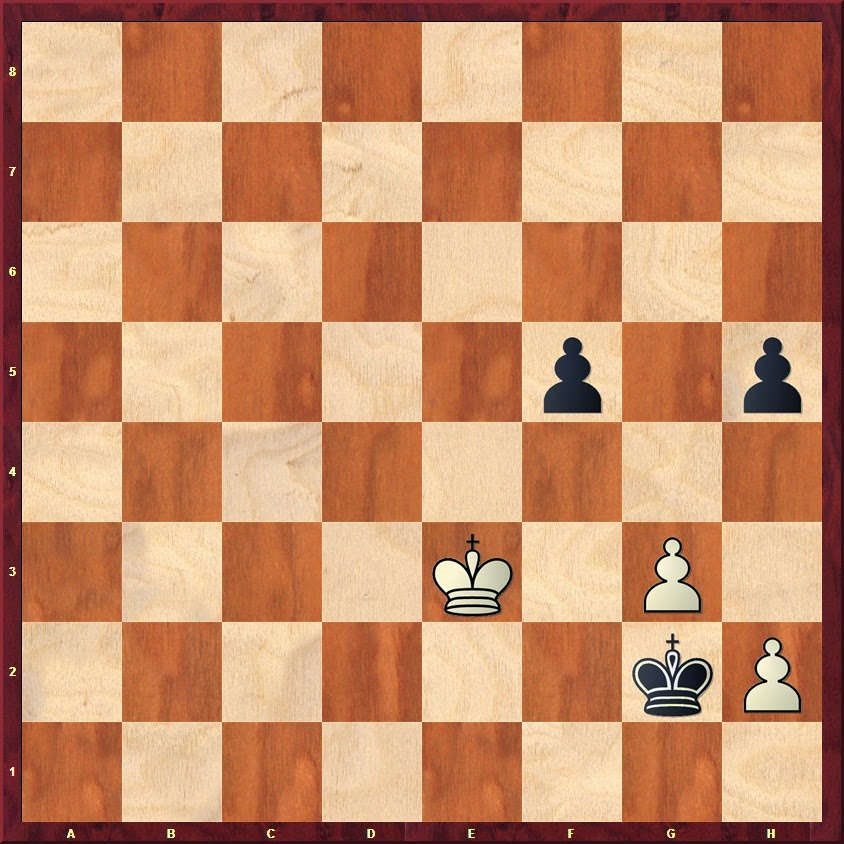 It is important for the White king to use the e3 square.

Now h4 is pointless as after gh4, there is no f4. Hence Black must play 3...Kxh2 and after 4.Kf2 we reach a theoretical draw. 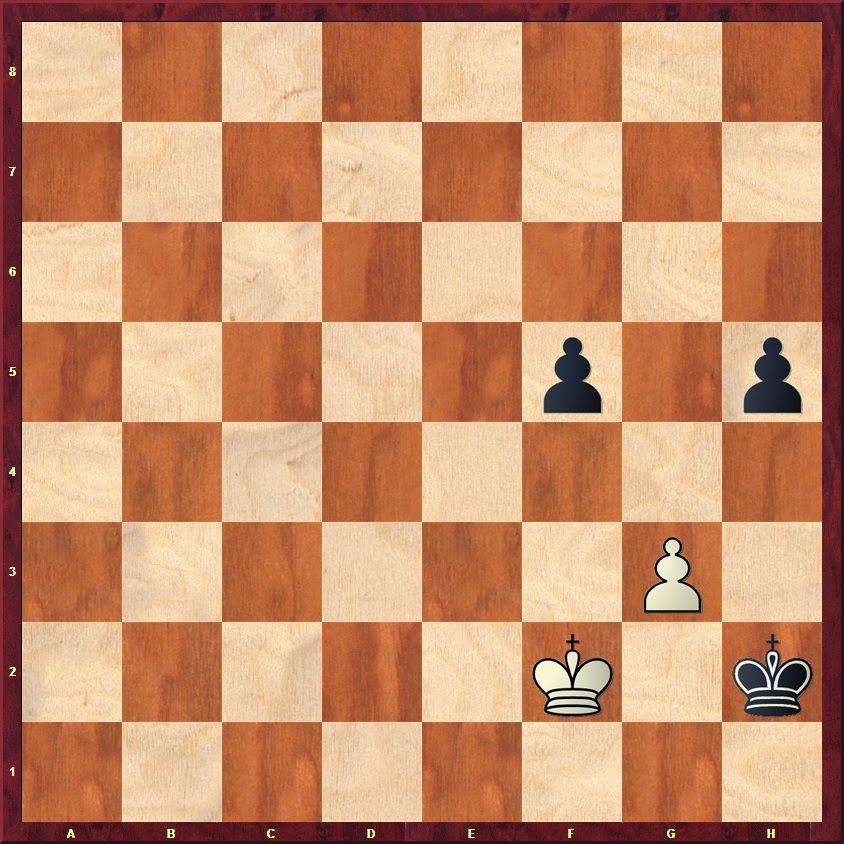 This is a position with mutual zugzwang. If it were White to move he would lose as Kf3 would be met with the outflanking manoeuvre Kg1! But here it is Black to move and wherever he goes, the white king just follows him. For eg. Kh1 is met with Kf1 and Kh3 with Kf3. 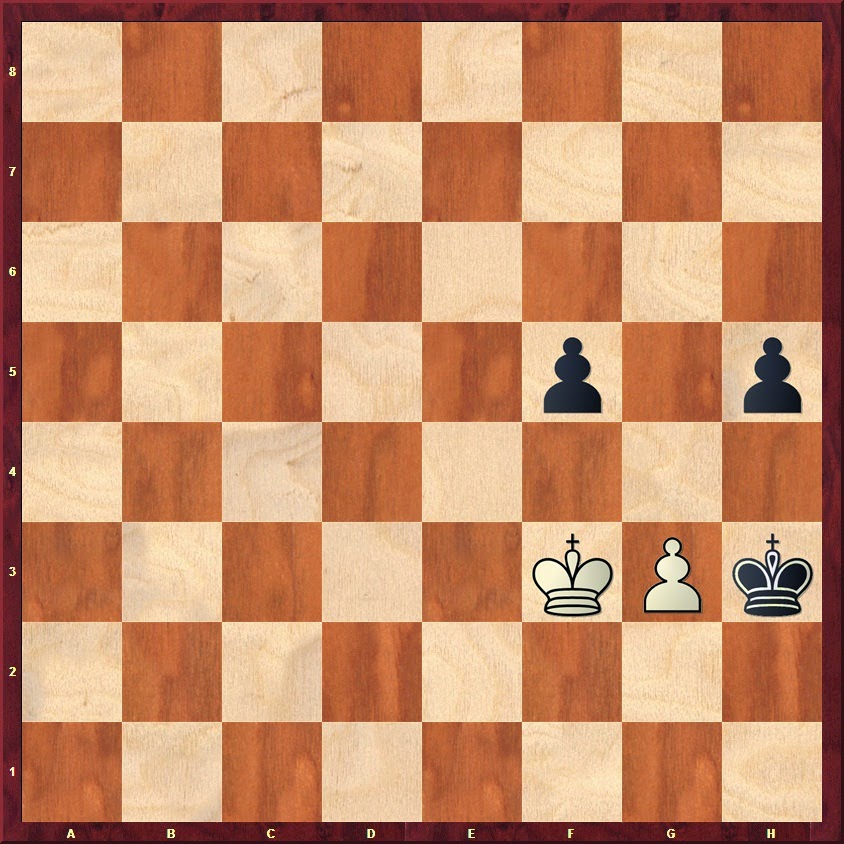 With Black to play, there is absolutely no way to make progress. Keep this position in your mind!

I was well aware of all these intricacies and hence could solve this position quite easily and quickly. After solving all the other Dvoretsky problems, I opened Aagaard's book and had the following position in front of me. 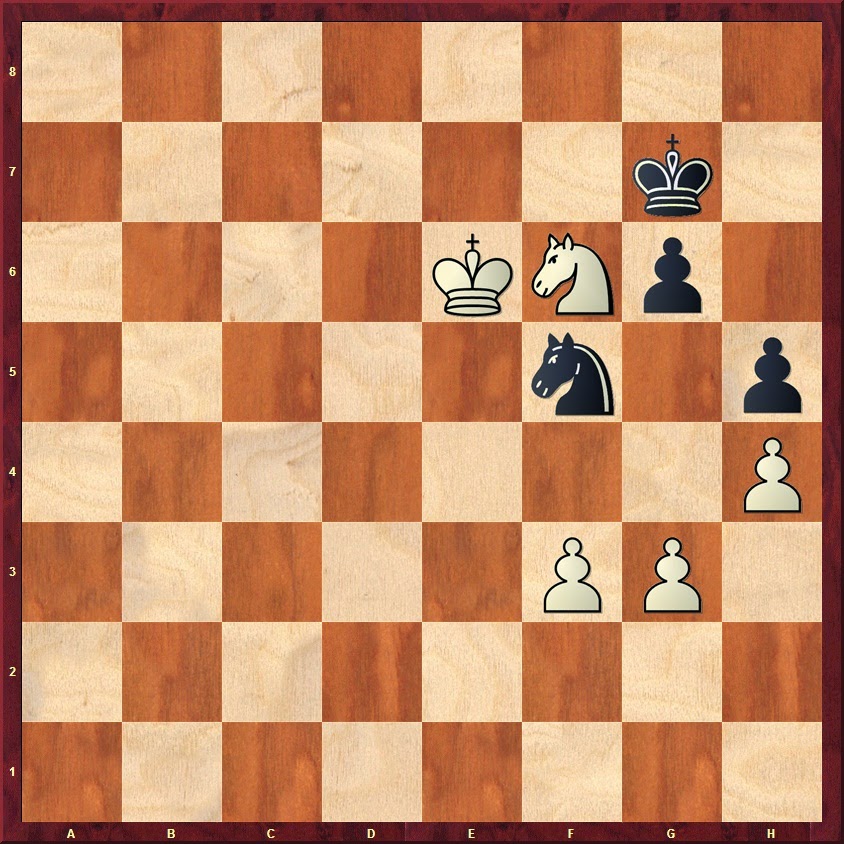 White to play. How should he continue?

It's clear that White has to do something concrete. His g3-pawn is hanging and Ne4 is met with Nd4+ when the f3-pawn falls. Hence White must start with 1.Nxh5! Black has no option but to attack the white knight with 1...Kh6 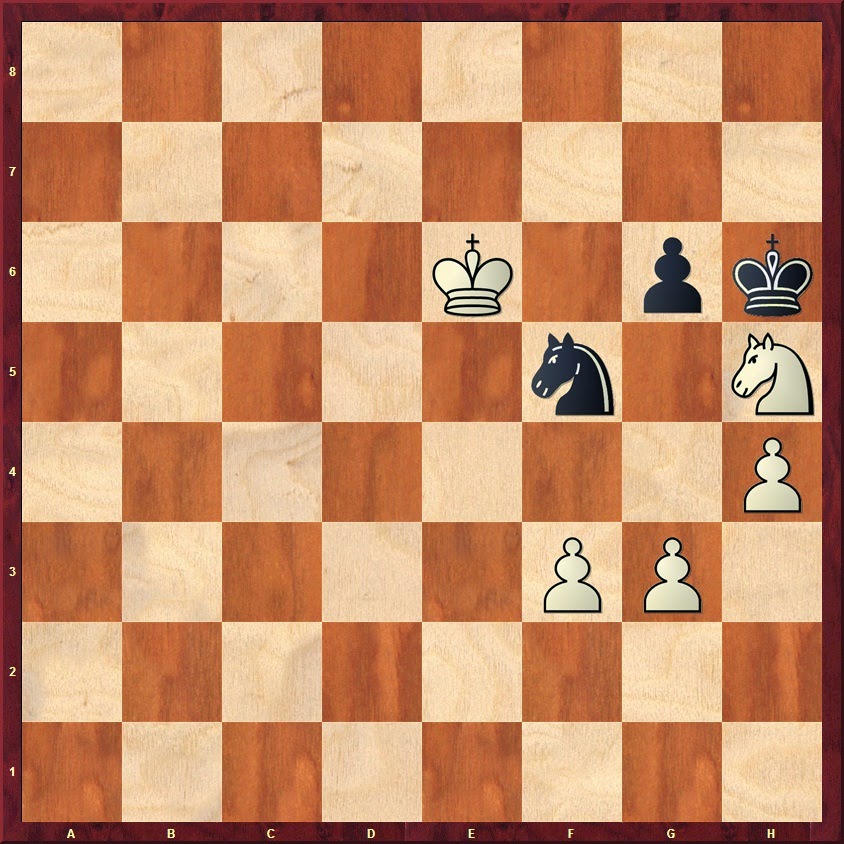 White knight does not need to move yet. Taking it with the pawn hangs the f5 knight and Kxh5 is met with g4 Kxh4 gxf5 with a winning pawn endgame. So the most natural move in this position is definitely 2.Kf6!

Everything just works for White here. The knight is taboo. And white next threatens Nf4, winning the g6 pawn. It was at this point, I noticed the move 2...Nxh4 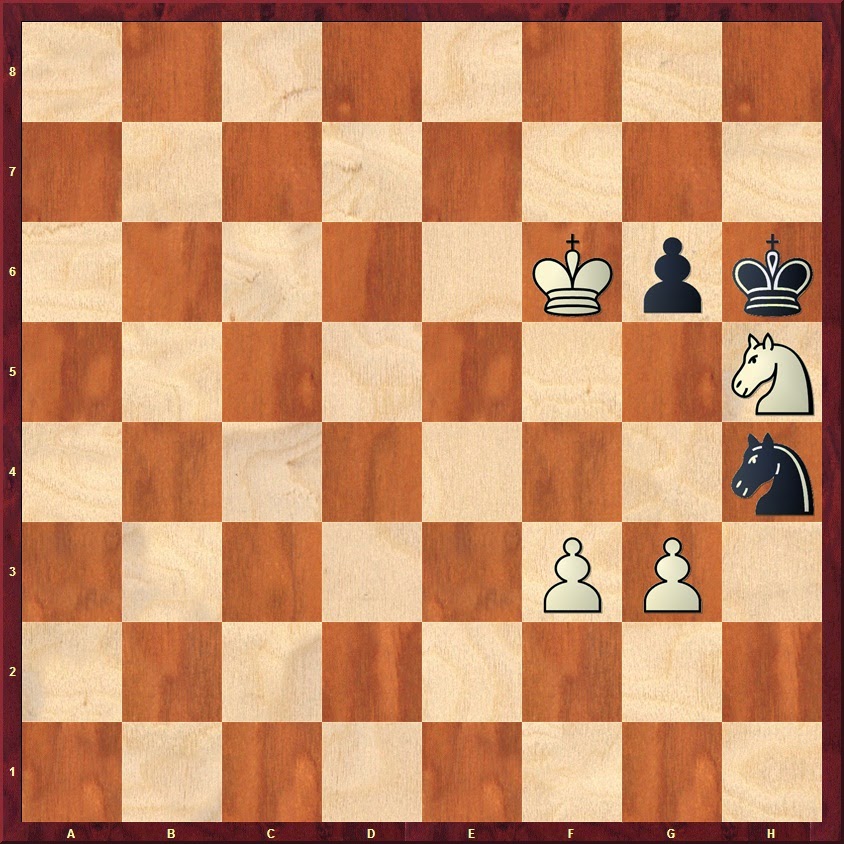 A curious position! Both the knights are hanging! In order to make progress White has to take the knight.
3.gxh4 Kxh5 And now Kg7 would be met with Kh4 Kxg6 Kg3= with a draw. White must play 4.f4. Of course Kxh4 lose to Kxg6. But Black will go 4...Kh6 and we reach the following position. 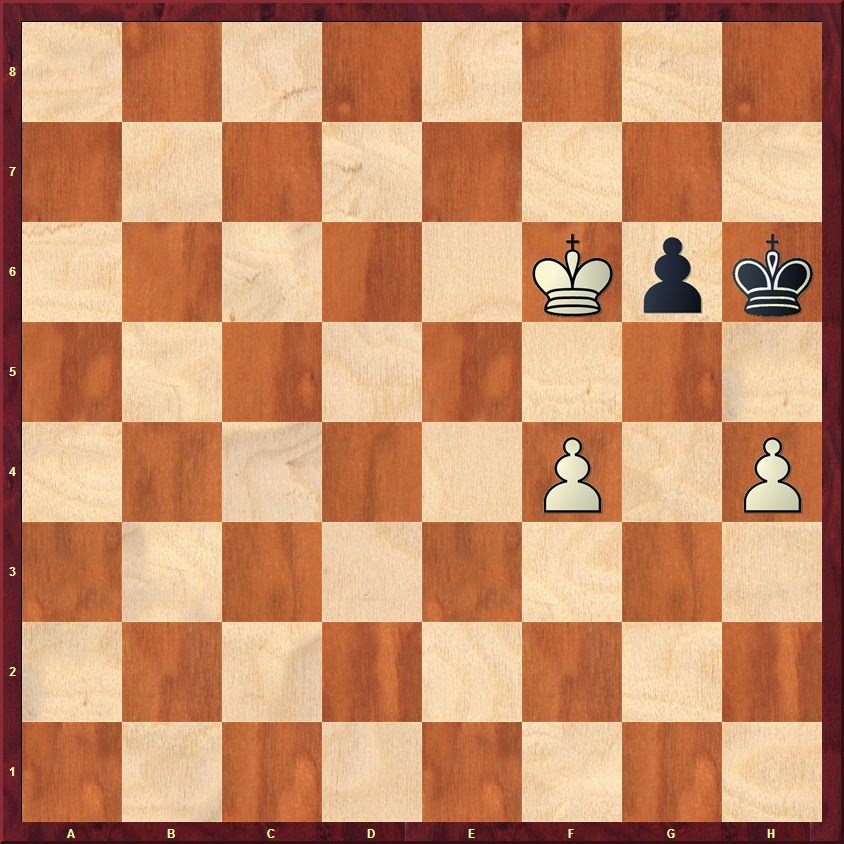 As you already remember from the Dvoretsky position that we analyzed above, this is a theoretical draw.

I tried really hard to find a way for White to win. But there was absolutely none. Finally I went ahead, solved the next positions and then checked the answers. 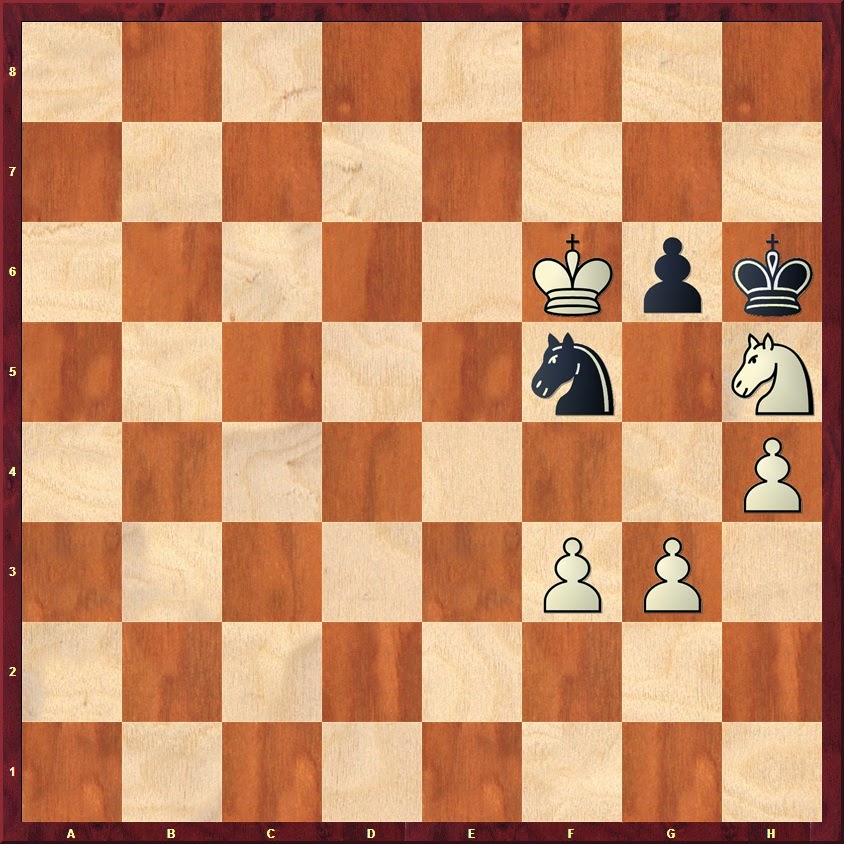 I opened my laptop and set up the position. I clicked on the tab reference and checked that the position was correct and it had occurred in the game Voitsekhovsky-Karalkin, Tomsk 2006.
When the patient is gravely ill and no diagnosis are to be found, we have to finally resort to doctor Houdini. And when I reached the below position which I considered a draw and switched on Houdini, the result was shocking. 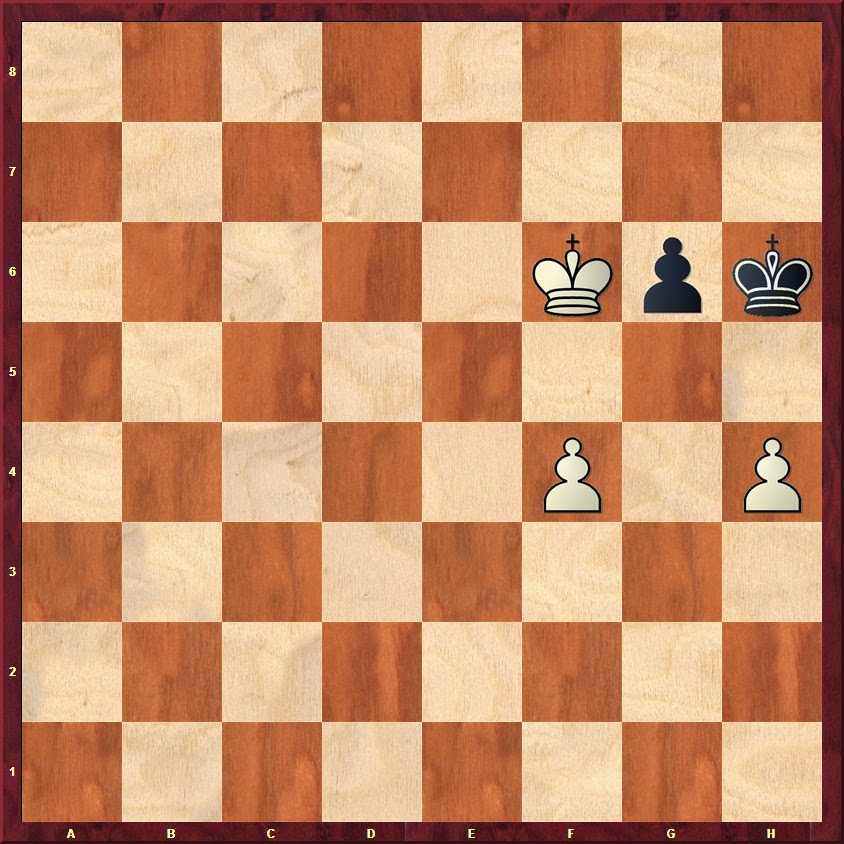 Houdini claimed an advantage of +- 10. something for White!

I was 100% sure that the Dvoretsky position was a draw. But I guess you already have figured it out what is the difference over here. For those who haven't here is it. 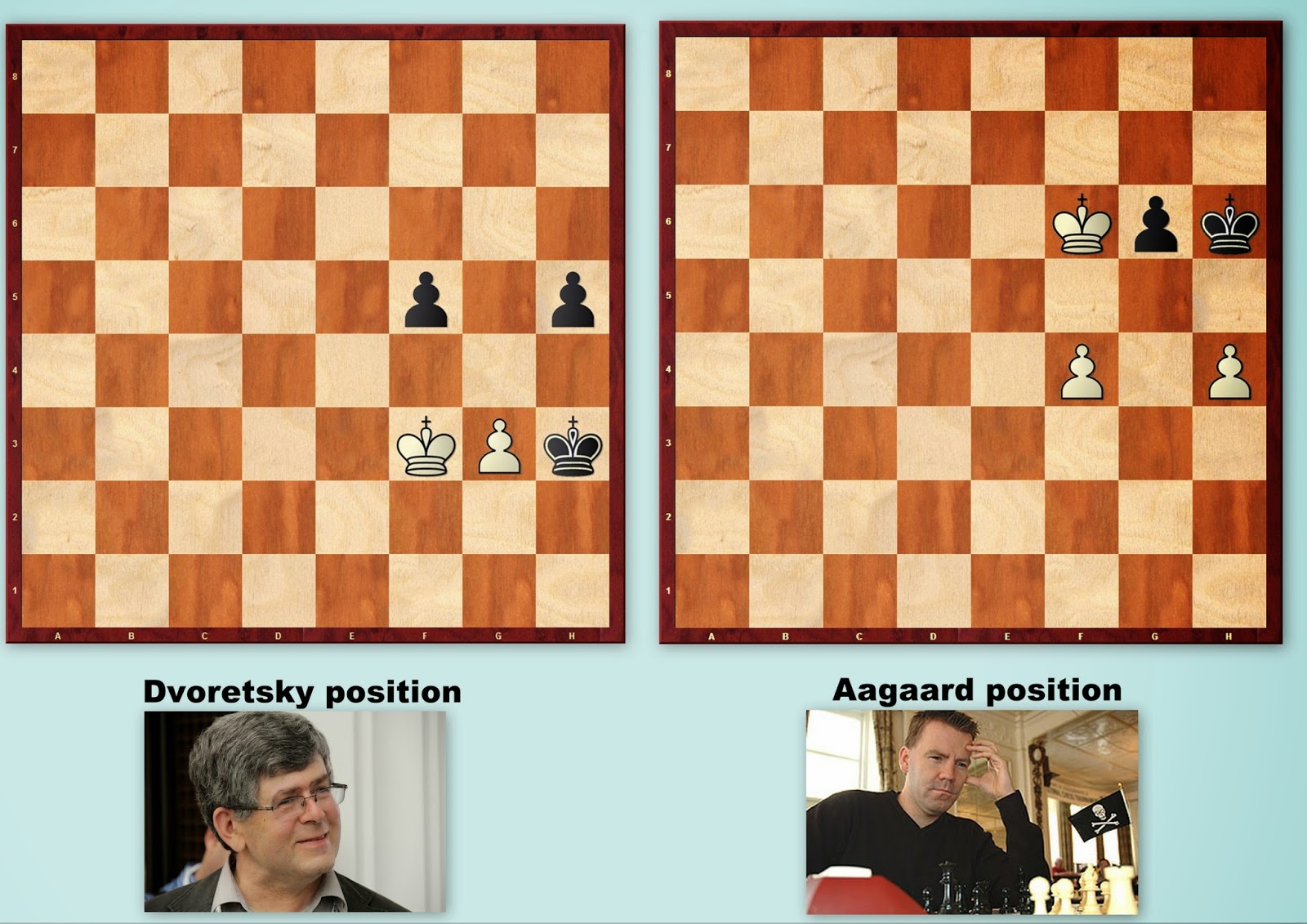 I tried to think a lot as to why exactly did I make this mistake. It would have been highly improbable that I would have made such an error in the Aagaard position if I hadn't seen the Dvoretsky position a few minutes before. When I saw the Dvoretsky position I simply said to myself that the kings keep moving up and down for eg. Kh2 Kf2 Kh1 Kf1 and so an and nothing happens. I didn't really pay attention to the positioning of the kings.
When I saw the Aagaard's position, I made the similar test. Kf7 is met with Kh7 Kf8 with Kh8 and I can do nothing about it. Hence in my mind, I took both the positions as same, as they passed the test filter that I had created.

Of course you can just argue that I was careless, but I want to assure you that I wasn't. I was solving very seriously and at my full strength.
It was a big eye-opener for me and I learnt a lot from this mistake.
My advice to all the players would be: In chess it is useful to have patterns in your head. Drawn setups, fortresses, ideas etc. But when you do assign a specific position to your memory be sure to check all its aspects. Because if you do not do that and just vaguely remember things, there is a high chance that someone out there will fool you pretty soon! :) 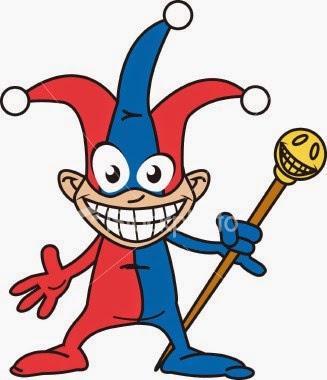 Addendum: This article became quite popular within hours of me writing it and was published in a Spanish blog.
And on monday 29th September, Jacob Aagaard published it on his Quality Chess blog. I think this for me is a huge honour and a seal of approval that my work is of a decent quality! :)
Posted by Sagar at 11:29 AM